Who Ya Gonna Call??

This has been an odd week to a certain extent as I have actually had some time to myself for a change. Amanda went to Rhode Island to babysit for her nephew while my son Mike and his wife Laura went down to Newport News, Virginia to do some house-hunting and take physicals for their new jobs down there. Both lost their jobs last March during the first round of lay-offs at Electric Boat in Groton and now both are being hired as draftsmen down at the shipyards there.

I have always liked history and I guess I've always had a bit of an interest in the supernatural, too. Just ask my brothers about the house in Tuscon, Arizona that scared me to death and my great fear of sleeping with the closet door open! But if you put the two interests together, what better place to go to than at an old cemetery? By myself. When it's almost dark. Yep. I'm crazy.

Anyhow, all that aside, I needed to go to the local Stop & Shop for a couple of things and decided that while I was heading that way I might as well grab my camera and explore a bit over at the Yantic Cemetery on Lafayette Street here in Norwich. The cemetery was established in July of 1844 which makes it fairly old; it's covers a little over 28 acres so it's quite large, and it has quite a number of interesting graves with quite the variety of stones.

There are former governors and other politicians buried there along with a number of Norwich's former prominent citizens. If you walk through and read some of the names on the stones, it's easy to recognize a lot of them. There's also a Civil War Memorial complete with a 30-pounder Parrot rifle known as the Andersonville Memorial Gun located at the eastern end of the cemetery. It was this gun and concentric circle of stones that first caught my attention as I am quite interested in anything to do with our country's Civil War. 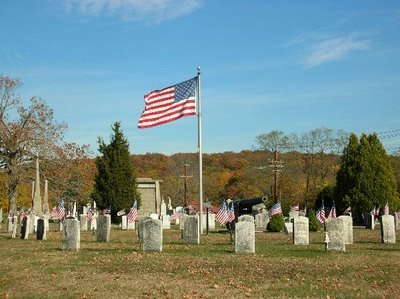 I arrived at the cemetery close to 7:15 or so and though the sun was definitely going down, it wasn't what one would call dark yet so I didn't believe I was breaking any laws by being in the cemetery after sundown (former police dispatcher that I am I have this thing about trying to adhere to the law!). I decided to take some pictures of some of the more interesting gravestones while in the back of my mind was the thought that maybe I'd catch something "interesting" on the pictures - yes, I've watched too many episodes of Ghost Hunters on the SciFi Channel and Most Haunted on The Travel Channel!

Even though it was starting to get dark and there were various and assorted twig-snapping sounds from the woods surrounding the cemetery, I wasn't creeped out or anything but felt very much at peace while I was there. When I was a child, I wouldn't even look at a cemetery after dark if we happened to drive by one but I've obviously outgrown that fear as otherwise there would be no way on God's green earth I'd be walking around by myself in one of the oldest graveyards in town while it was rapidly getting darker! I didn't feel in any great rush to jump in the car and get the heck out of Dodge as quickly as possible so I took quite a few pictures before calling it a night.

In total, I took close to 50 pictures while I was there and left at just about 8:00 when twilight had definitely set in. After getting what I needed at Stop & Shop, I came home and downloaded the pictures into the computer anxious to see if I had "caught" anything. I was viewing the pictures through a slideshow program and hadn't seen anything that looked too out of the ordinary when this popped up on my screen: 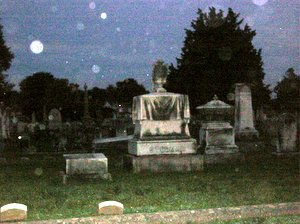 The Stedman gravesite to the rear of the cemetery

Rapidly followed by this: 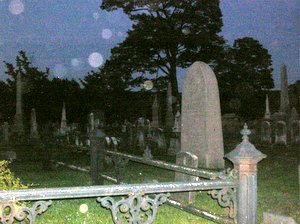 Graves located in the middle of the cemetery

Needless to say I about near fell out of my chair and as a shiver ran up my spine all I could think was "WOW!". After going through all of the pictures, I found about four or five other pictures with a smaller amount of orbs in them but nothing compared to these two. And I can guarantee you that the flash didn't reflect off of anything, neither the moon or stars were out, and I was out in the middle of the cemetery and too far away for any "outside" lights to affect anything. If there was something wrong with my camera you would be able to tell with every picture but that's just not the case. Amazing.

Orbs are a hotly debated topic amongst paranormal investigators and skeptics alike with most skeptics wanting to believe that there's simply something wrong with the camera or the developing process. Are orbs ghosts? I don't think so, I think they're simply a manifestation of energy and I believe that there is a A LOT of energy left behind in graveyards. How can there not be? Death evokes some of our deepest and strongest emotions and there are probably more tears shed in cemeteries than anywhere else as a lot of times it's where we not only say our final goodbyes but we come back over and over again to be with our loved ones who have departed this earthly plane.

Call me crazy if you'd like but I find it to be quite interesting and I'm actually looking forward to going back and taking more pictures sometime soon. Though next time there's a good chance I'll be taking someone with me!

If you're interested in seeing more pictures, feel free to email me and I'll be happy to send what I have along to you. Got a favorite place that's a little out of the ordinary? A story or a picture you'd like to share? I'd love to hear about it or see whatever you might have!