"Freedom has a taste, and for those who have fought for it, the taste is so sweet the protected will never know ..." ~ General George S. Patton

Tomorrow is Veterans Day here in the good ole' US of A - a holiday that was known internationally as Armistice Day when people first started recognizing the date as a holiday back in November of 1919. The original date marked an agreement to the temporary suspension of hostilities between the Allies fighting in World War I and Germany which went into effect on the eleventh hour of the eleventh day of the eleventh month in 1918. World War I didn't officially end until June 28, 1919 with the signing of the Treaty of Versailles but people felt that November 11th was the more important date in the ending of the war.

In November 1919, President Woodrow Wilson proclaimed November 11th as the first commemoration of Armistice Day with the following words:

"To us in America, the reflections of Armistice Day will be filled with solemn pride in the heroism of those who died in the country’s service and with gratitude for the victory, both because of the thing from which it has freed us and because of the opportunity it has given America to show her sympathy with peace and justice in the councils of the nations…"

At the time, people mistakenly thought that World War I was the "war to end all wars" so on June 4th, 1926 Congress officially recognized the end of World War I with a resolution to observe November 11th as Armistice Day stating that it was "fitting that the recurring anniversary of this date should be commemorated with thanksgiving and prayer and exercises designed to perpetuate peace through good will and mutual understanding between nations". An Act that was approved on May 13th, 1938 made Armistice Day an official National holiday primarily set aside to honor the veterans of World War I.

Sadly World War I was nowhere near the "war to end all wars" and on June 1st, 1954, after World War II had required the greatest mobilization of soldiers, sailors, Marines and airmen in the Nation’s history and again after American forces had fought aggression in Korea, the name was changed to Veterans Day to honor all U.S. veterans. The 83rd Congress, at the urging of the veterans service organizations, amended the Act of 1938 by striking out the word "Armistice" and inserting in its place the word "Veterans" and hence our current holiday of Veterans Day was born.

As a veteran myself, this is one holiday that tends to really anger me as it seems that to a lot of people it's simply another holiday to have the day off from school or work, a day when banks and post offices close, stores have Veterans Day sales, and the people who really deserve the recognition that this holiday is supposed to afford are overlooked. Chances are good a lot of them are working this day - some of them in Iraq or Afghanistan or Lord knows where else protecting our country and the right of the people who live in it to have a holiday.

As a kid I can remember my father working just about every single Veterans Day there was and it just didn't seem right that there was a holiday for him but he didn't get to take the day off. Here was a man who had put his life on the line in both Korea and Vietnam, a man who had his truck blown out from under him while moving planes off of the runway in DaNang during one of the many bombings that they went through constantly, a man who served proudly for twenty years, but his job required that he be there on holidays no matter who that holiday was for. And my father wasn't/isn't alone in that category by any stretch of the imagination.

How many of us have taken the time to thank a veteran for what they've done not only for this country but for ourselves? How many school kids who got today off from school to sit home and play video games or watch TV even know WHY they have this day off? How many people who flock to the local mall for all the great sales even know WHY there are sales on this date? I'm going to guess the answer to be not too darned many!

During the course of your day tomorrow (the official Veterans Day and not the the extra day tacked on to give at least some people a three-day weekend) try to remember to say a silent 'thank you' to those men and women who have served or are serving in our Armed Forces - remember that we aren't "the land of the free and the home of the brave" simply because it sounds good in a song but because there are people who are willing to put their lives on the line for us to be so. Even if we can't remember that every day, let's try to at least remember it on the day dedicated to these people!

As for me - I'm darned proud of my Dad's service record and I'm glad I had the foresight to tell him that before he died. It would have been one of my greatest regrets to have never told him. 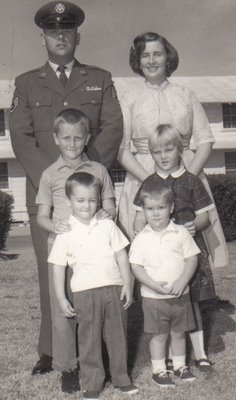