"Though you're someone in this world that I'll always choose to love, from now on you're only someone that I used to love." ~ Natalie Cole

Prior to April of 2000, when I moved into my current humble abode, I had done a lot of moving around. Sometimes I think it was because I had grown up in a military family that moved just about every two years and the idea of staying in one place for too long was foreign to me and sometimes I think it was just because I would get restless. Whatever the case may be, I will have been residing in the same place for a record seven years come April. Amazing. But not what I intended to write about today!

I guess the above just prefaces what I am going to write about which is that a lot of people have come and gone through my life over the years in one form or another - sometimes by my constant moving and sometimes not. To be honest there were some people that didn't upset me horribly to see go but more often there were others that I not only hated to see become a part of my past but truly hoped that they never would be.

However, life is a constantly changing process and change does bring about loss in many forms. It's ironic, though, that sometimes there are people in our lives who are as close to us as humanly possible, that we think will never not be an active part of our lives, that turn out to be nothing more than cherished memories and maybe even the occasional awkward silence when we run into them again.

I had such a run-in the other day while waiting at my doctor's office for my now bi-weekly iron infusion (yes, folks, my hemoglobin levels are slowly creeping towards normal!) I got to my appointment with plenty of time to spare with Amanda in tow as she had a Christmas gift card burning a hole in her pocket and we intended to go to Waterford afterwards so that she could make use of it but, as seems to often be the case with that particular office, I ended up sitting in the waiting room for awhile. Normally this particular waiting room is packed - very often it's standing room only - but on Tuesday afternoon it was just myself and Amanda and a lot of empty chairs.

While sitting there watching "Back to the Future II" and waiting to be called into the back to have a needle stuck in my arm, the door opened and in walked a guy I hadn't seen in over two years. He did a double-take in my direction and then stood there for a few seconds with his mouth opening and closing like the lobsters you see in the tanks at grocery stores when you're trying to pick out the best one to take home and throw in a pot of boiling water for dinner - looking for all the world like he wanted to say something but no words could come out. He eventually shut his mouth, turned, and went to the receptionist's desk without a backwards glance.

After my initial shock at seeing him, I managed to squeak out a very tiny "hi" - which I'm sure was at the subsonic hearing level only audible to dogs and dolphins! - and then I just sat there with what must have been the "oh wow, I just saw a ghost" look on my face. My astonished look was such that it caused Amanda to take off her earphones long enough to lean over to me and ask "what?" My answer? "Someone I used to work with". Lame, yes - but the best I could do given the circumstances.

Truth be told, the person standing and fidgeting at the reception desk less than ten feet away from where I was sitting, the guy who had done the marvelous lobster impression, was the last guy that I had given my heart to almost four years ago. He was one of those people that I had never wanted to become "nothing more than cherished memories and maybe even the occasional awkward silence when we run into them again" but he was. Big time. 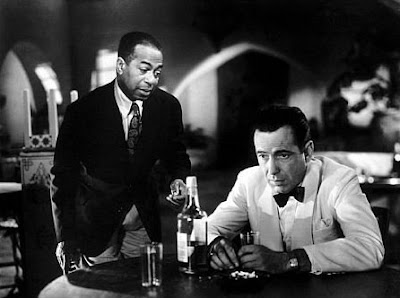 Well, okay, so I'm no Humphrey Bogart but neither was he any Lauren Bacall! However I'm sure you get the meaning! I haven't moved across the world and opened a cafe in Casablanca in order to escape my past, I've stayed right here in Norwich where chances are I'm occasionally going to run into my past - but who knew that running into said past could be so awkward that even the politeness of society is impossible? Obviously things didn't end well between us but you would think that after four years the man could have done more than stood there opening and closing his mouth like a lobster caught in a tank awaiting his boiled fate. Sigh ...

At any rate, the door had no sooner closed on his rapidly retreating figure when my nurse came out and summoned me into the back room. As one of those people who subscribes to the theory that "everything happens for a reason" I wondered what the reason behind that encounter might have been but, unlike I have been known to do in the past, I am not going to over analyze the situation. It was what it was.

Still - some good did come of this awkward encounter ... after he left I didn't feel like my heart had been ripped out of my chest, tossed on the floor, and stomped on like I felt the last time I ran into him at a grocery store two years ago and that's a good thing - a very good thing; I didn't feel like going home and having a good cry over woulda - coulda - shoulda's and that's a good thing - a very good thing; and I was able to laugh about it with my friends who were there four years ago and knew exactly the hell I had been through and that's not just a good thing - that's the best thing.