"All good things are wild, and free." ~ Henry David Thoreau 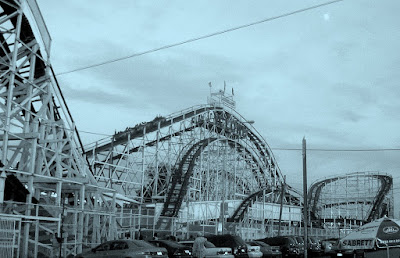 Saturday Photo Scavenger Hunt
This Week's Theme: WILD!
This week's theme was a tough one compared to last week's "technology" theme as - truth be told - I am just NOT a wild woman! I'm not sure if I've ever been wild when you get right down to it though I did get in my fair share of mischief when I was in high school! Ah but those are stories for another day!

My interpretation for this week's "wild" theme is the Cyclone Rollercoaster on the boardwalk at Coney Island in Brooklyn, New York. Compared to the new super-steel rollercoasters that are all the rage at most amusement parks these days, this old wooden coaster probably looks pretty tame but don't let it fool you!

The Cyclone debuted on June 26th, 1927 and the ride was so intense that it made Charles Lindbergh say that, "A ride on the Cyclone is greater than flying an airplane at top speed." In 1969, the Cyclone was condemned by the City of New York but made a completely refurbished return on July 3rd, 1975 pulling in a record $125,000 its first weekend.

I first rode the Cyclone in 1977 when my friend Carol and I took a subway ride out to Coney Island during one of our frequent visits to New York City. We were both rollercoaster enthusiasts and to say that the ride was great! would not be doing it justice!

This past summer when I took this picture, I was able to ride the Cyclone again (bad back be damned!) and it was just as I remembered it - one heck of a wild ride with lots of airtime and screams. My youngest daughter Jamie and our friend Paula took the ride with me and they both loved it, too.

As for Henry David Thoreau's quote he's wrong about one thing - the Cyclone is definitely wild but it's not free. You'll pay $6.00 for one minute and fifty seconds of screaming terror but if you want to stay on and "go around again!" it's only $4.00. Trust me, it's well worth every penny!