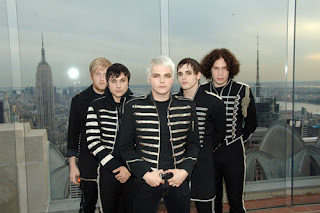 Growing up in my parents' home, if I wanted to listen to "my" music I was more than allowed to do so as long as it wasn't anywhere within hearing distance of my folks. The radio in the car didn't get switched over to what we kids might have wanted to listen to as it was my parents' car and that made it their radio. Hence I grew up listening to a lot of Johnny Cash, Slim Whitman, Jim Reeves, and the like. I'm not complaining - just stating a fact.

Amanda has no idea how lucky she is in that I not only let her listen to "her" music when I'm within earshot but I actually like some of the stuff that she listens to. Granted, I don't like all of it - Mindless Self Indulgence, H.I.M., Marilyn Manson, Korn all come to mind - but lately I have taken quite the liking to one of her favorites bands, My Chemical Romance.

My Chemical Romance (or MCR, My Chem, or The Black Parade as they've come to b

e known by their fans) is an alternative rock band from the great State of New Jersey (with the exception of drummer Bob Bryar who hails from Chicago). The band was formed a week after the 9/11 terror attacks by lead singer Gerard Way after he saw the planes crash into the World Trade Towers. The band's first song "Skylines and Turnstiles" was inspired by Way's experience on that day.

The band released its first album I Brought You My Bullets, You Brought Me Your Love in 2002. As a concept album, it tells the story of two criminals who are gunned down in the desert, a la Bonnie and Clyde. In 2003, after signing a deal with Reprise Records and following a tour with Avenged Sevenfold (another of Amanda's favorite bands), MCR began work on their second album which continued the storyline from their first album. Three Cheers for Sweet Revenge, released in 2004, went platinum within a year. The band released three singles from the album: "I'm Not Okay (I Promise)", "Helena", and "The Ghost of You". All of which I can say I've seen on video many times over!

r of 2006 The Black Parade was released as the band's third concept album centering on a character known as "the Patient," who, dying of cancer, looks back on his life from a jaded perspective. The first single "Welcome to the Black Parade" was pre-released on iTunes September 11th, 2006 - the fifth anniversary of the World Trade Center terror attacks. The song became the band's first U.S. Number One single when it topped the charts on October 26, 2006 and stayed there for seven weeks. Since then they have released the single "Famous Last Words" and on April 2 will release "I Don't Love You" as their third single.

MCR's music has been described as emo, emocore, pop punk, and punk revival - all of which mean nothing to me - I just like the way they sound! The band themselves have said that their music was inspired by the likes of Queen, Iron Maiden, Smashing Pumpkins, and Pink Floyd and in some of their music this really shows. Growing up, the band members were also very influenced by horror films and comic books (Gerard was working at DC Comics at the time of the 9/11 attacks), and because of that their music, lyrics, and image all have overt elements of fantasy, storytelling, horror, and theatricality. Not unlike David Bowie and Alice Cooper of my day!

I recently bought The Black Parade CD for Amanda and after listening to it, I am hooked and can't seem to get enough of it - after all, I do so love a good parade and marching band! Seriously, though, I find the music itself to be really good and the lyrics definitely tell a story. And just to throw out a useless and little known fact, Liza Minelli does guest vocals on "Mama" - which just goes to show that I'm not the only older woman who likes these guys!

The Black Parade World Tour, with over sixty concert dates began in February and, with any luck and some financial finagling, I hope to be able to get tickets for Amanda and a few of her friends when the second part of the tour comes around to the DCU Center in Worcester, Massachusetts on May 8th. This would, of course, require that I attend the concert also as I can't very well leave them alone but I'm sure that this is a cross I could easily bear! But don't get too excited yet, Amanda - this is certainly not written in stone!

The only question that needs to be asked at this point is why - at my age - do I find a 29-year old who wears eyeliner and black mascara, so drop-dead sexy? I fear that I may have been spending way too much time with Amanda and Nicole and need to get out with adults more often!

What's even stranger is how when I consulted with my older-than-me best friend out in California, expecting some words of wisdom along the lines o

f "get over it, Linda!", we ended up in a debate as to whether Gerard looked better with black hair or blonde!! MizCyn is leaning towards the blonde but I've got to go with the black ... maybe ... the blonde is pretty nice, too ... oh, I don't know! He's just too cute!! I think I need help!! Lots & lots of help!! 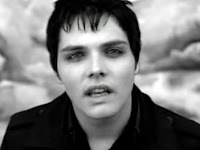 Gerard from the new video "I Don't Love You"

Email ThisBlogThis!Share to TwitterShare to FacebookShare to Pinterest
Labels: music, My Chemical Romance