Art From Her Heart 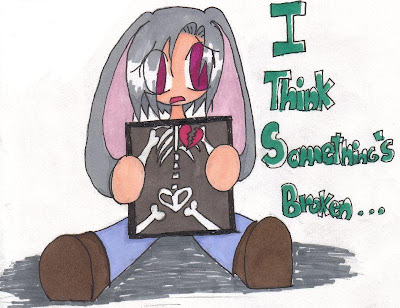 As parents we do our best to protect our children. We immunize them against diseases, we teach them "Stranger Danger", we warn them about the consequences of drugs and alcohol, we even instruct them about the predators who lurk on the Internet. But no matter what we do, we can't protect them from everything that might cause them hurt - it's just not humanly possible.

A few days ago I wrote a post about driving past the house of a boy that Amanda liked and the memories that evoked for me. Amanda knew full well that I was going to be writing that post and I had her approval even though I think she was a little bit afraid of what Dan might think (the guy that Amanda liked). I believe that she was both nervous and yet curious to find out what his reaction would be and, after a couple of her friends pointed him in the direction of said post, she found out today what he thought ...

This would be the part where I can't protect her.

Dan, who really does seem to be a nice kid, does not reciprocate the feelings that Amanda has for him and simply wants to be friends. Of course Amanda was hoping with the hope that all teenage girls have that things might have worked out differently and is, understandably, sad and feeling heart-broken. She drew the above picture shortly after talking to Dan this afternoon (I found it posted on her MySpace page and snitched it from there to post here.)

I really do feel Amanda's pain and I hurt for her. If I had a nickel for every tear I cried over a boy when I was a teenager, I would have had enough money to buy a car by the time I was 16 - and a good car, too, not some piece of junk! It's a very familiar feeling and, as much as I wish I could have protected her and spared her this particular hurt I know that it's a life lesson she had to learn on her own. Ah, unrequited love - it doth truly suck!

When you see most of your friends around you pairing off with someone and no one seems to be interested in you, it hurts. It hurts more when there's someone you meet that you'd like to be more than "just friends" with but their feelings aren't reciprocated. It's a kick in the ass to your self-esteem and makes you ask yourself the eternal question of "what's wrong with me?" It never dawns on you that there's nothing wrong with you - that's just not how the whole process works.

Even though she may not feel that way now, Amanda has a lot of time to find the right guy who will appreciate her for who and what she is. Granted, were she still living in Kentucky she'd almost be in prime marrying age (sorry, sorry, I couldn't resist!) but she's really only 14 & 3/4's and she's got a lot of life ahead of her despite her broken heart of the here and now.

Not that I want to delude her into thinking that it necessarily gets easier as you get older (my last broken heart wasn't so long ago that I have completely forgotten it) but there will be so many more opportunities ahead of her to meet guys that she's going to like and eventually one of them is going to look at her and think "wow! I gotta get to know her better!". And then it's going to be Dan-who?

In the meantime if she wants to be a little Emo* or a little angsty then I can fully understand it and appreciate it as long as it doesn't go on for an overly long and dramatic period. I can be sympathetic and understanding for awhile but not for an infinite amount of time!

Now as for Dan, all I can say is - your loss, fella! When Amanda has become a famous artist and musician you're going to wish you had the bragging rights to having been her first boyfriend! Tsk, tsk.

*A group of white, mostly middle-class, kids who find imperfections in their life and create a ridiculous, depressing melodrama around each one. Definition courtesy of the Urban Dictionary