After spending a good part of the morning looking at some great architecture (the theme for the Saturday Photo Scavenger Hunt), I had just settled down on the couch with a cup of coffee and some toast while Amanda was in the dining room attempting to draw a picture of a large mouth bass, when we both heard what sounded like a very large truck go past the house. On a Saturday that’s fairly unusual because we live at the top of two very steep hills in the middle of a dead-end road and generally the only large trucks we get are the garbage man or the UPS guy during the week. Though it piqued my curiosity, it wasn’t enough to inspire me to get off the couch and look out the window.

Moments later, we heard what sounded like another large truck in front of the house and this time it was enough to pique my curiosity so I swallowed the last bite of my toast, put down my cup of coffee, and left my comfy spot on the couch to look outside. Imagine my surprise when I saw a fireman hooking up a hose to the hydrant in front of my house while a very large firetruck idled next to him! As Amanda might say – oh snap, son!

Sticking my head out the door, I noticed a very large cloud of thick black smoke coming from the house four doors down while a group of neighbors was gathering in the street. Two things immediately ran through my head – 1) I needed to move my car out of the way (I park pretty close to the hydrant) and 2) I needed to make sure everyone was okay (it’s that whole 911 dispatcher thing!). Of course, first I needed to throw on something more than my robe and slippers! 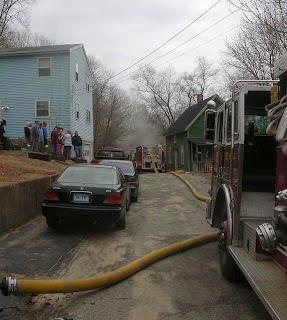 Looking towards the fire

Grabbing the closest clothes I could find (my work pants, a t-shirt, hoodie, and sneakers with no socks), I moved the car and then went to the gathering of people where one girl was kneeling on the ground and crying. After assessing that everyone had gotten out of the house and was okay, I joined the rest of the neighborhood in discussing what had happened while a multitude of firefighters continued to trudge up the hill.

I knew that an ambulance was enroute as Jen had called from work to make sure it wasn’t my house that was on fire but I was beginning to think that more than one might be needed as I watched the firefighters struggling up an extremely steep hill in full turnout gear with Scot packs strapped to their backs. Knowing how I feel walking up that hill with nothing strapped on my back, I was envisioning any number of heart attacks or incidents of respiratory distress!

Why were they walking up the hill rather than arriving on the back of a firetruck, you may well ask? Well, like I said, we live at the top of two very steep hills on a narrow dead-end road that doesn’t have room for a lot of fire apparatus; plus, there is only fire hydrant on the road. The next closest hydrant is down at the bottom of the main road so once an engine had hooked up to that and driven up the hill dropping hose behind it, there was no way that anyone else could drive over it and come up the hills. This meant that any other responding personnel (fire, police, and ambulance) had to park at the bottom and trek up on foot. And trust me – it is not a fun trek on the best of days!

Pretty soon I saw the ambulance crew arrive pushing the stretcher over the crest of the hill and my heart (and lungs) went out to them! One firefighter had been injured in a fall so they didn’t even have time to catch their breath before they needed to start patient treatment. After getting the injured party loaded onto the stretcher, they now had to start back down the hill which was probably going to prove even trickier because if the stretcher got away from them, the guy on it was going to have one wild ride and he’d have a lot more than an ankle injury to deal with!

At that point, I decided it was time to do more than stand around and talk with the neighbors and offered to carry some of the gear back down the hill to help out the ambulance crew. Due to the incline, I ended up not only carrying the gear but helping to hold the stretcher back until we got to the bottom of the second hill where the patient was loaded into an ambulance and sent to the hospital.

Not being in any great hurry to climb back up to my house, I stayed down on the main road for awhile talking with some of the cops I used to work with and the ambulance crew that was standing by at the scene should additional medical help be required. But I was just putting off the inevitable as I needed to be at work myself in just a little over an hour plus I had never finished my cup of coffee! 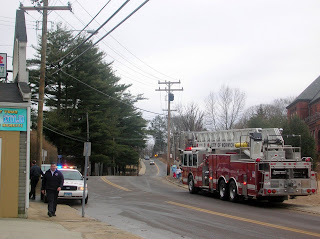 View from the bottom

Finally, having no other choice, I climbed back up the first hill and then took some time to catch my breath while I watched one of the engines backing down the hill and rolling hose up as they went. After a couple of moments I began the second part of my ascent and eventually reached the summit and wheezed my way back into the house. Amanda wasn’t having a whole lot of sympathy for me as she walks up those hills every school day while lugging a 20-pound backpack so she just smirked when I collapsed on the couch to finish my coffee. I can’t say that I blame her, had the role been reversed I probably would have done the same!

By the time I was ready to leave for work, almost all of the fire apparatus had left the area though there was one engine still at the scene doing overhaul. The fire could have been a lot worse than it was but the City of Norwich Fire Department had done a fine job getting it knocked down and extinguished before it engulfed the whole house.

Sadly, though, a single mom and her three children are now without a home as a result of a microwave oven spontaneously combusting. Still, it could have been so much worse. Which reminds me, I’ve got to call my insurance agent about that renter’s insurance we were discussing just last week …

If you're interested, you can read the article from The Norwich Bulletin about the fire here and for my more pics (including the firefighters climbing the hill!) click here.