Grab the Saturday Photo Scavenger Hunt code and play along! 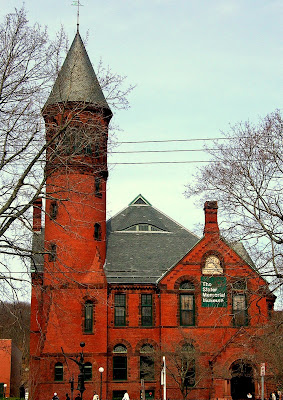 For this week's theme of architecture I have chosen the most prominent building on the campus of the Norwich Free Academy, where Amanda attends ninth grade. This building is the Slater Memorial Museum which houses not only the school's auditorium but also a museum and art gallery.

The building is named for John Fox Slater, a successful Norwich businessman and donor of the largest gift made to education in his day; the establishment of a $1-million fund "for the education of freed men" in 1882.

In 1884, the son of John Fox, William Slater, expressed an interest in finding a way to honor his distinguished father. It was suggested that a building for The Norwich Free Academy would be a tribute to his father's far-sighted gift of philanthropy, and to that end Mr. Slater provided $100,000 for its construction. The building was designed in the Richardsonian-Romanesque style by Worcester architect Stephen Earle.

"Meanwhile, the Academy's third principal, Dr. Robert Porter Keep, a noted Greek scholar, suggested the idea of creating a collection of plaster casts of some of the world's greatest sculptures for the new museum. On March 23, 1887, Edwin Robinson, then in charge of the classical collections for the Boston Museum of Fine Arts, accepted Dr. Keep's offer to select, purchase and install a collection of Egyptian, Near Eastern, Greek, Roman and Italian Renaissance casts in the museum. Robinson went on to become Director of the Metropolitan Museum of Art in New York, and now, more than 100 years later, the Slater cast collection is one of the three largest remaining in the United States." **

The Slater Memorial Museum is truly one of Norwich's finest buildings and is quite majestic during all seasons. Maybe one of these days I'll actually go to the museum part; Amanda tells me it's very interesting!