The Lost Weekend or My Adventures NOT in Shangra-La 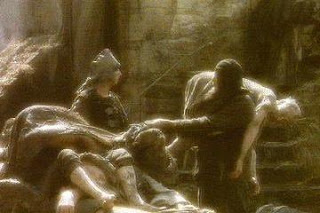 As Mark Twain once said, "The rumors of my demise are greatly exaggerated" or - better yet - to quote from one of my favorite movies, Monty Python and the Holy Grail, "I'm not dead! I'm getting better!" Least ways I feel better and am finally back on my feet despite, or maybe in spite of, a few grim prognoses from some of the people that I work with who were circling around the potential overtime my absence would produce like vultures around a bit of carrion!

For those of you out there who have also suffered from the occasional bad back and know what it's like to be totally incapacitated for days at a time, I think you understand what I mean about how you feel when you are finally once again able to get up and walk around like a normal human being, albeit a bit more gingerly! Perhaps it's not quite like Lazarus arising from the dead or the mythical Phoenix bird making a glorious return from the fire and ashes but it's pretty darned close as far I'm concerned! 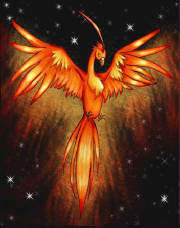 Even though my back isn't feeling 100% (and probably never will!) I am beyond glad to be out of bed for several reasons; first and foremost is the fact that there really is such a thing as too much of a good thing and too much time in bed is one of them (hey, hey, get your minds out of the gutter!). After awhile there is absolutely no comfortable position that one can attain and what's even more discouraging is knowing that you can't even stand up or sit to alleviate some of the stiffness of laying in bed for too long. Normally bed is a place of comfort and refuge but after several days it becomes a place of torture!

One of the other reasons I'm glad to be mobile again is the fact that Amanda, bless her heart, is one of the world's worst caregivers. Ever. From the time she got home from school on Friday and asked me why on earth I was still in bed to yesterday afternoon when I was finally able to limp down the stairs, not once did that child ask me if I needed something to eat or drink! At one point I did ask her for some toast and you would have thought I had asked her to go on a quest to bring me back the Holy Grail itself (sorry, Monty Python reference again!) 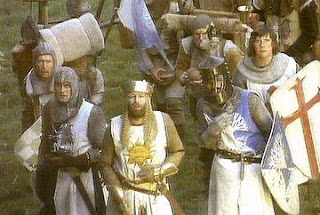 The child could not have heaved a heavier sigh or rolled her eyes higher and for a lousy piece of toast no less! Can you imagine if I had asked for something more?? Nope, I definitely do not see a career in nursing ahead for her!

There were actually three teenagers in the house at various times that could have lent a hand or two as Amanda had Dan and Nicole over visiting but sadly, they appear to be heading down the same career path as Amanda and not one of them is going to be a CNA or home health aide!

At one point on Saturday, I awoke from one of my drug-induced states to see the three of them standing at the foot of the bed looking down on me with grim expressions on their faces while they just stared. "Wow, you look awful" was their pronouncement before they turned and fled back downstairs to take up where they had left off with their PS2 game while I contemplated what the purpose of their visit had been. Briefly I wondered if that was how Scrooge had felt when the three ghosts came to visit him before I remembered that they didn't all show up at once and then I rolled over and went back to sleep.

Last but not least, I am happy to be back on my feet because I was able to go back to work and put in the hours needed to earn that coveted paycheck that I can't live without. I had really wanted to get back to work yesterday but after attempting to get on my feet and ambulate more than ten feet yesterday morning, I knew it was a lost cause. Had I actually made it into work one of my 911 conversations may well have gone:

Me: American Ambulance, what is the address of your emergency?
Caller: I don't feel good at all, I really need an ambulance over here.
Me: You don't feel good? Ha! Let me tell you how I feel!

Nope, calling out and staying in bed for another day really seemed to be the wiser choice as far as my career was concerned!

Anyhow, all that aside, I am happy to be on the road to recovery and because I'm afraid this is a path I may very well find myself traveling down again, I have made an appointment to go see my orthopedic doctor on Wednesday to see what the discs in my back are doing - other than mashing some nerves that don't need to be mashed!

I just hope the next time I find myself feeling like I've been run over by a truck that my youngest daughter Jamie is here because she possesses the nursing skills her older sister doesn't and I might actually be able to get some tea and toast with a lot less hassle!

Finally, to all those who left me words of encouragement and well wishes on this blog, I want to say a very sincere and heartfelt thank you. Your caring and concern really meant a lot to me and I was touched by all of your comments and words of support. For those who might think that the Blogosphere is an impersonal space inhabited by those people who are merely out to tell their own stories and don't give a thought to anyone else, let me just say that couldn't be further from the truth. I have "met" some of the kindest, most caring, sincere people I could ever hope to meet through these electronic pages.

P.S., Kathy - thank you for the kind offer to take the kids to the concert, I know that would be quite the sacrifice for you and if I'm laid up again in May, I will keep that in mind! Also, no, I don't have that poster yet which is too bad because it would have given me something good to look at while I was lying captive hoping for a small crust of toast and a sip of tea!

P.S.S., I plan to get around to everyone's blogs that I've missed very soon! I'm sure I've got a lot of reading to catch up on!

Email ThisBlogThis!Share to TwitterShare to FacebookShare to Pinterest
Labels: back pain, thanks