Movie in a Minute

********************
Before I run out the door for another fun-filled day of 911, ambulances, and wheelchair vans I thought I 'd throw out a quick question to my faithful readers who actually take the time to post a comment every once in awhile (and for those of you who read but never comment - now would be a great time to jump in here!).

Now that the Oscars are over and Hollywood is once again done patting themselves on the back for another year, I want to know - what's your very favorite movie and why? When flipping through channels on TV what movie is going to make you stop, sit down, and forget that you were going to do or watch something else? What movie did you just have to have for yourcollection regardless of the cost?

These thoughts occured to me last night while Amanda was clicking through channels while were getting ready to watch the elimination show of American Idol (which I just haven't been following all that closely this year) and she came across Moulin Rouge on IFC. That was it, the clicking stopped right there, and we both dropped what we were doing to watch a movie that we've both seen at least a dozen times and could watch anytime we wanted to do because I own it on DVD.

For those not familiar with Moulin Rouge, it's a story about love...

Christian [Ewan McGregor], a young writer with a magical gift for poetry, defies his bourgeois father by moving to the bohemian underworld of Montmartre, Paris. He is taken in by the absinthe-soaked artist Toulouse-Lautrec, whose party-hard life centres around the Moulin Rouge, a world of sex, drugs, electricity & the shocking Can-Can. Christian falls into a passionate but ultimately doomed love affair with Satine, the Sparkling Diamond [Nicole Kidman], the most beautiful courtesan in Paris & star of the Moulin Rouge.

My favorite quote from the movie is "The greatest thing you'll ever learn is just to love and be loved in return" while Amanda has been prone to quoting, "Thank you for curing me of my ridiculous obsession with love!" (especially after the past few days!).

Written by Baz Luhrmann and Craig Pearce, Moulin Rouge won 2 Academy Awards for Best Art Direction and Best Costume Design as well as legions of fans after it was released in June 2001. I never saw it when it was on the big screen but came across it after it had been released on DVD and after the first watching I was hooked. In the grand tradition of like mother - like daughter, Amanda has always put it on the top of her list of favorite movies.

So, what about you, constant reader? What movie is your favorite and why? 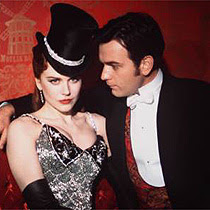