Newton's Laws of Motion As They Relate to Getting Up in the Mornings!

********************
I'm not the Science expert in my household - Amanda is much better at it then I ever could hope to be as she is, after all, taking Honors Science at NFA and doing quite well with it. As a matter of fact, I simply took the requisite science courses I needed in school and that was it. Lately, though, I've been giving some thought to a few things of a scientific nature.

These thoughts mostly occur to me when I've swatted the 'snooze' button on the alarm several times and am trying to talk myself into getting out of bed before I'm late for work. In particular, I have been thinking about Newton's "Principia Mathematica Philosophiae Naturalis", or Laws of Motion. Newton's First Law of Motion, the Law of Inertia, states that:

"Every object in a state of uniform motion tends to remain in that state of motion unless an external force is applied to it."

The key point here is that if there is no force acting on an object, or if all the external forces cancel each other out, then the object will maintain a constant velocity (speed of motion). If that velocity is zero, then the object remains at rest. Translated that means that if I simply hit the 'snooze' alarm every nine minutes and make no effort to swing my feet over the side of the bed and propel myself in the general direction of the bedroom door, I am not going anywhere! In other words, objects at rest tend to remain at rest!

Once I finally do swing my feet over the side of the bed and start towards the door, I should be able to continue that forward momentum unless there is a force applied in the opposite direction to slow me down. I think what that means is that if I turn around and look at the warm, cozy bed that I just left it could compel me to move backwards and I could find myself climbing back into bed and once again becoming an "object at rest". I believe this is what Newton meant but, again, I am not the scientific one in the family!

After I've actually managed to accelerate myself out of bed, which generally occurs after much mental cajoling, Newton's Second Law of Motion, the Law of Dynamics, comes into play:

"The acceleration of an object of constant mass is proportional to the force acting upon it."

This law concerns force and what causes objects to move and involves a lot of Calculus, another subject that I am not well versed in! Acceleration is the changing velocity of an object when a force is applied to it. According to Newton's Second Law, for an object (me) with a constant mass (weight) to be accelerated requires an external force be applied for the velocity to change. This is the scientific equation of F=m*a or a = F/m.

I believe what this means in relation to my getting out of bed and staying out of bed, is that the smell of freshly brewing coffee (a force) will get me (the object) to move more quickly (velocity) away from the bed. Scientifically speaking, it would be helpful for me to set the automatic coffee maker at night to start brewing coffee at about the same time the alarm clock is set to go off so that the smell of the coffee will help propel me away from the bed once I've managed to climb out of the thing and started heading towards the door. 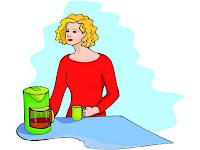 Which then brings me to Newton's Third Law of Motion, the Law of Reciprocal Actions or the Action-Reaction Law:

Now I haven't quite got this one figured out as to how it relates to my being able to get out the door in order to get to work on time but what I think it might mean is that the caffeine reacts on my state of wakefulness and my state of wakefulness in turn pushes me out the door in the general direction of work. In other words, the caffeine acts and my body reacts. At least that's the closest I can come to figuring all of this out!

So who says you don't use Science in real life? I use it every single morning when I have the great debate with myself on how long I can prolong the inevitable process of getting up and going to work! My high school Science teacher would be so proud - and yet - so disappointed! Perhaps I should leave the Science to Amanda?
Posted by Linda at 3/22/2007