********************
At long last it's the final chapter in the Personalized M&M Saga that began way back on April 3rd when I found out that I had won the contest to be the 500th commenter at Bobbarama - the very funny humor blog of an inkblot named Bob (who looks rather like a smiley-faced M&M with hair himself!)

I'm sure that when I won the contest, Bob had no earthly clue that it would take me over three weeks and seven different posts to finally decide what to put on the M&Ms but it turned out to be the dilemma of a lifetime that was finally resolved with not one but two polls wherein I asked you, my faithful readers, to cast votes for your favorite sayings. Had it been left to me I might well have ended up with M&Ms emblazoned with "duh ..." and "uhm ..." on them! 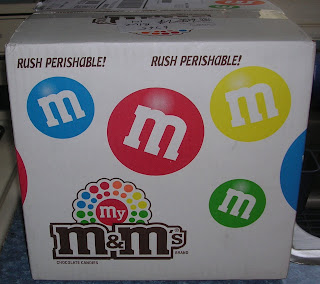 When I arrived home today, the above box was sitting on the front porch and immediately brought a smile to my face as I knew that all of the waiting was over and inside would be not just any M&Ms but my M&Ms. Not to be overly dramatic but the excitement was just about as good as Christmas morning as a child when you come downstairs and see all of those presents under the Christmas tree! Granted, it's the middle of May and the box was sitting under the mailbox but I'm sure you get the idea!

Even though I wanted to rip right into the box as soon as I came in the house I decided to be an adult about things and changed out of my work uniform first, read my latest utility bill (and gasped in shock and dismay at the amount listed), and then thumbed through the rest of the junk that passes for mail these days. Finally Amanda told me to quit fooling around and open up the box for crying out loud! 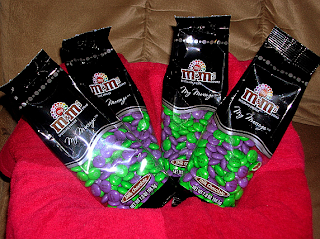 Inside the cardboard box was a foam container and inside that was an abundance of bubble wrap along with the above four packages of my personalized M&Ms. Aren't they pretty? Amanda immediately snatched up a package and attempted to beat a hasty retreat out of the kitchen with it. I managed to stop her and a hand-to-hand battle ensued whereupon I wrested the bag from the hands of a hungry teenager! As a way of killing time until I actually opened one of the packages, she began popping the bubble wrap which was annoying but at least kept her from devouring an entire bag of M&Ms in what would surely have been no time flat! 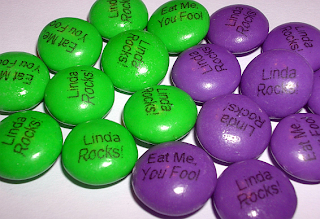 Because I'm getting old and apparently blind, I really wasn't able to read the sayings on the candies very well until I took the above close-up picture! Part of the reason that some of them are upside down is because I couldn't even see well enough to position them all in the same direction! If I could make one suggestion to the good folks over at the M&M factory - they might want to change the printing to the same color as the lone "M" on the front of the candy as that's in gray and much easier to read than the black print - at least for those of us who really should wear glasses but are stubbornly refusing!

Upon completion of the photo session, I finally allowed Amanda to eat some of the M&Ms and then sat down to write this post. Halfway through she came into the living room and grabbed the bag that sat next to me on the couch. When I told her to give them back she asked "Why? Do they have your name on them? Besides, they're telling me to eat them!" Ah yes, my daughter the wise ass, I have no idea where she would have come by such a trait!

In conclusion, a big thank you once again to Bob for giving me the opportunity to have so much fun with this and for such a fantastic prize! The only thing that would have made it better would have been to have Bob deliver them in person but I guess it's a long trip from San Diego just to deliver candy! I'll be taking one bag to work with me tomorrow to show off over there and hiding the other two before my chocolate-crazed teen decides that they need to melt in her mouth and not in my hand!

You're all welcome to help yourself to a cyber-handful!
Posted by Linda at 5/14/2007