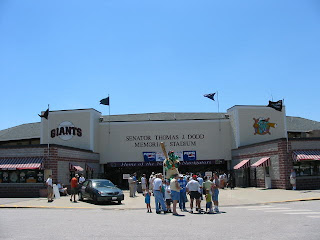 We here in Norwich are able to brag about being the home of the Eastern League Double-A Affiliate of the San Francisco Giants - the Connecticut Defenders (they used to be called the Norwich Navigators and were the Double-A team for the New York Yankees but that's old history and not something I have the time or desire to get into tonight).

The Defenders play at Thomas J. Dodd Stadium, which is a very nice ballpark and one that I worked at for three seasons when it first opened back in 1995. By the end of my first season, I could pour one heck of a beer and made some pretty decent tips doing so but again, that's old history and not for tonight's post!

As part of EMS Week at American Ambulance, my current place of employment where I've never poured a single beer, they offered tickets for last night's game against the Trenton Thunder (who are now the Double-A affliate of the New York Yankees though they used to to be the Double-A affiliate of the Boston Red Sox). Having not been to see a game since the last season I worked there, I thought it might be a fun evening out and something different to do. In retrospect, I'm not quite sure what I was thinking.

Amanda invited her usual posse along but Nicole wasn't able to attend as she had to be in Rhode Island at her mother's house this weekend but Dan said that he was up for it and it "would beat sitting around the house on a Friday night." I arrived at the ballpark with two black-clad teenagers in tow and we took our seats directly behind home plate. 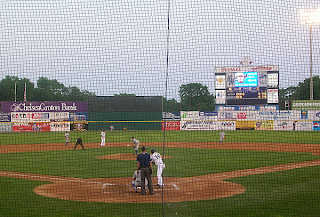 The seats couldn't have been better (well, except for that annoying safety netting one has to look through but I guess that's better than being beaned with a foul ball) but the company was soon to prove otherwise. Dan had apparently never been to a baseball game in his life (huh?? and this kid lives in America??) and Amanda seemed a bit put-out that there appeared to be no other kids their age in the entire ballpark. Now, I'm sure that wasn't true but I suppose it may have looked that way to them. Before the first inning was even over, they had started to amuse themselves by drawing (Amanda had her trusty drawing pad and pens with her for just such an occasion). 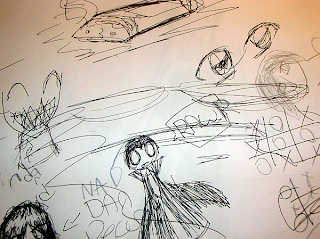 Heaven forbid she do some sketches of the ball players or the people around her - oh no, not my daughter, she appeared to be doodling figures from the Emo Drawing 101 course that surely had to be offered at the local school. 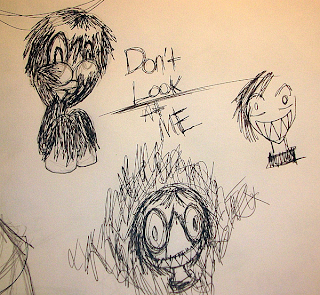 Next came a series of tic-tac-toe games between Amanda and Dan while I attempted to watch the game and enjoy the between-inning antics of Cutter the mascot or the people that were called out of the stands to participate in assorted contests. 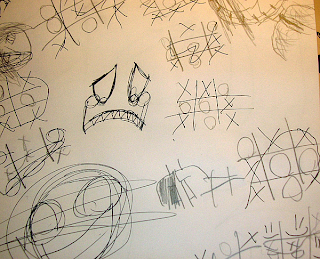 As the game slowly progressed (no one had scored by the 7th inning or even barely gotten on base), neither nachos or fried dough had managed to perk up either Amanda or Dan but instead they seemed to be slipping even further into boredom and - dare I say it? - angst as the picture below shows. It was at that point that I decided that enough was enough and perhaps it was time to exit stage right and call it a night. I rather doubted that even the fireworks after the game were going to be of much interest to either of them and besides, leaving during the 7th inning stretch insured that I would get out of the parking lot long before the crowds - long, long before! 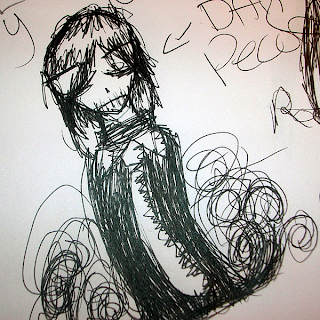 As we were walking through the parking lot, trying to find the car, Dan apologized profusely for having not been more "into" the game and then came up with the equation which is the title for this post: Emo + baseball = bad. No kidding; though my daughter constantly tells me that she isn't Emo! At least Dan admits it, Amanda is apparently just in denial.

On the way home we did what apparently the rest of Norwich was doing and stopped in at the local Dairy Queen for an ice cream cone so at least the night wasn't a total wash! After dropping Dan at his home, we made our way back to Norwich and enjoyed the night air with the moon roof and windows open in the car. Amanda had seemed to have perked up by leaps and bounds and decided to fool around with the digital camera producing the following picture: 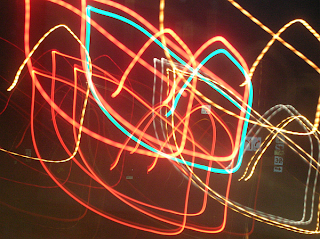 I'd say that it was one of her most colorful achievements of the night!