I Am No Longer a "Cool Mom"


When I bought tickets to go see My Chemical Romance back in March, I don't think I had any idea exactly what I was getting myself into. I figured that I would drive Amanda, Nicole, and Dan up to the concert, we'd all have a good time, and then we'd head home possibly grabbing something to eat on the way back to Connecticut. Wrong!

Amanda had very different plans as to how this whole thing was going down and it included meeting some of her MCRmy friends (other fans that work tirelessly to promote the band) that she had made on-line and during her trip to Anime Boston as well as staying after the show to try to meet some of the band members and give them some of the artwork she had drawn for them. I had a feeling that we were in for a very long night and that feeling was pretty much right on the mark.

The show kicked off at exactly 7:30 p.m. with one of the worst bands that I have ever heard. (Please bear in mind that this is my own opinion and not the opinion of anyone else lest you take offense; Amanda said that they sound much better on their MySpace page!) The original opening band, Muse, had canceled so a group by the name of Circa Survive was filling in. Hailing from Pennsylvania, this was apparently the biggest venue the group had ever played and their sound system was absolutely horrible. Due to the extreme reverberation, no one could understand a single word they were singing and their lighting kept them in the dark most of the time. Thankfully they only played for 37 painful minutes, though the reverberations did make for a rather massaging type affect with the seating so there was that.

Word must have been out that the opening act was not all that great as the crowd in the arena looked to be pretty sparse at the beginning of the concert but before My Chem began, the place had filled up quite nicely. The general admission section in front of the stage, where Amanda really wanted to be, had gotten quite crowded and I was thankful that GA tickets had not been available when I purchased our tickets as it didn't look like any place I wanted to be! Going to a rock concert is one thing, standing shoulder to shoulder with hundreds of sweaty teens in general admission is another thing entirely! Young at heart will only take you so far!

When the lights went down and Gerard Way, the lead singer, was wheeled out onto the stage on a gurney while dressed in a hospital gown to begin singing the opening words to "The End", almost the entire arena jumped to their feet while hundreds of girls began screaming in unison. I looked at the lady sitting next to me, who looked to be about my age, and we just smiled and shook our heads as we knew we were in for it then. 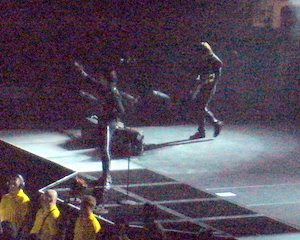 Amanda sprang to her feet along with everyone else and didn't sit down again until the lights came back up at the very end of the show. She sang, she jumped, she waved her cellphone in the air, she danced, she cried ... she had the whole rock concert protocol down to perfection while I sat there looking at her wondering who this kid was and what had she done with my daughter?? I had to smile, though, as she was having the time of her life. Plus I think it was the most exercise she'd gotten in her life to boot! I can only imagine how she would have been down in "the pit" {shudder!} 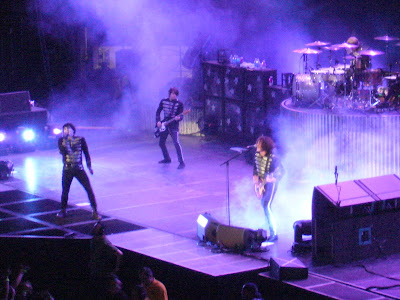 As this is The Black Parade Tour, the band ran through the entirety of the album and it seemed that everyone in the audience knew all the words to all the songs (myself included) as it sounded like the entire arena was singing along with Gerard while he gave one heck of a performance on the stage. Let me just tell you that the guy can move ... no wonder the girls were all screaming! These guys do a fantastic show complete with pyrotechnics, fire, and black and white confetti that rains down like snow for almost an entire song and the audience loved every single minute of it. 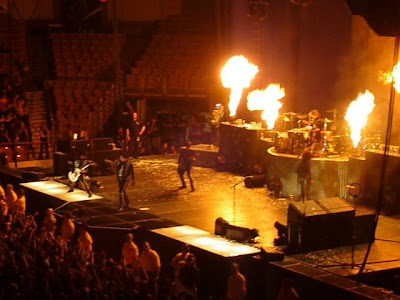 At the end of the first set, MCR did a quick change and came back out to do five songs from their previous album, Three Cheers for Sweet Revenge. Having listened to this CD along with the other for the past several months guess what? - I knew all of these songs, too! I could have stood and sang and jumped and yelled along with Amanda but I decided to not embarrass her and stayed in my seat to enjoy the show. After over an hour and a half, My Chem wrapped up but the night was far from over. 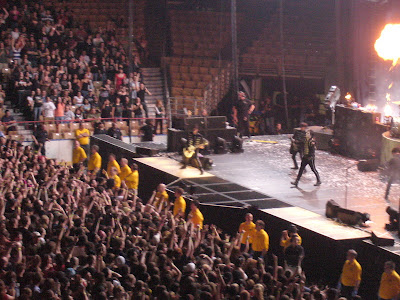 We met up with Marisa, an MCRmy buddy who took these wonderful pictures of the band performing with the camera she managed to sneak in, near the merch stand (that would be the counter where they sell all the band merchandise to those not familiar with the lingo) so that Amanda could get a t-shirt and arm band before we proceeded to the back of the DCU Center where she hoped to meet at least some of the band members when the poor guys tried to get out of the building!


Amanda had drawn some special pictures (I got to hold the folder during the show as she was too busy with the aerobics portion of the program) and she really wanted to be able to get them to someone in the band. While waiting with the rest of the fans, Amanda was showing her drawings to someone when suddenly a whole group of people came over and ooh'd and aah'd over her artwork proclaiming it to be the some of the best they'd ever seen. Next thing I knew, she was sitting in a circle on the pavement with her own flock of groupies while Nicole, Dan, and I stood back and were somewhat amazed.


Finally, at almost 12:30, there was movement at the door and Frank Iero, who is the rhythm guitarist, came out to meet some of his adoring fans. Amanda was standing in a group over near the door with her MCRmy buddies while I stood across the driveway and watched the whole thing unfold. Shannon, whom Amanda had met no more than half an hour before, managed to get Frank's attention and told him "Before you sign anything of mine, you have to see my friend's artwork because it's totally amazing and you're going to love it." Frankie then turned to Amanda and said "Hello, is this what she was talking about?" Amanda managed to nod her head and gave him the sketches. He took a minute to look at the drawings and said "Dude, these are amazing, you are so (expletive) talented. Thank you very much, I'll make sure that the guys will see this." Amanda stammered out "Thank you, I mean you're welcome" and that's when Frankie gave her a big hug.

A little later, after signing autographs for some other people, Frankie turned back to Amanda and autographed two tickets from the show - one for her and one for Nicole. At that point Amanda gave him the rest of the things she had for the band, including a small plushy doll of Gerard she had handmade. Frankie told her that he would get the things to the guys and assured her that they'd love them and ended by telling her the things were "(expletive) awesome".

I've got to give her a lot of credit as after that Amanda merely walked across to where I had been standing and simply stood there with a shell-shocked look on her face. No squeeing, no passing out, no shaking (unlike some of the others there!). After Dan and Nicole had gotten a chance to meet Frank, I decided that chances were good no one else was going to come out and it was high-time to head home. It was 12:45 in the morning at that point and I was still looking at an hour drive back home and I was starving!

Once we all got in the car with the doors shut and seatbelts fastened, Amanda let out with the longest and loudest squeal I have ever heard come out of her mouth! Luckily, I was still partially deaf from the concert so it wasn't as bad as it could have been! She said she had wanted to hold it in just in case anyone else came out because she didn't want to seem like a deranged fan-girl. Again, I give her credit for her control!

So now, a little over 24 hours, later my hearing seems to have returned to normal while Amanda still can't speak above a loud whisper but she also hasn't stopped glowing or smiling or being totally excited about the whole thing. Amazing. There have been a lot of us telling Amanda for a long time that she's got talent when it comes to her artwork but apparently she refused to believe it until a rock star told her that she's "talented and awesome" (expletives again deleted!). What's a Mom to do?

Oh, and speaking of Moms - when I said that I was no longer a "cool Mom" it's because I am now "epic" according to Amanda and some of her MCRmy buddies because I not only took her to the concert and got her a t-shirt but I let her stay to give her artwork to the band. Hmm, I wonder what comes after "epic"??

Email ThisBlogThis!Share to TwitterShare to FacebookShare to Pinterest
Labels: concerts, My Chemical Romance