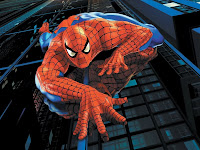 The past two days have been cool and rainy here in the great State of Connecticut and less than inspiring to actually accomplish anything (up to and including the Saturday Photo Hunt) so when my friend Paula called this afternoon and suggested a movie, I was all for it. Actually, her timing couldn't have been better as Amanda had Dan and Nicole over visiting and they were getting a little bored and I had been debating a movie myself.

Normally I'm not much of a movie theater person as it's somewhat cost prohibitive but there are just some movies that are better seen on the big screen to get the full effect. Today's choice, Spiderman 3, was one of them. The next installment of Pirates of the Caribbean is going to be another one as Johnny Depp is one man I don't mind watching in larger than life size. I've got to agree with Gale of Gem-osophy on this one - eyeliner never looked so good on a man! Well, except maybe on Gerard Way and Jared Leto but that's another post!

I have actually seen all of the Spiderman movies on the large screen and I'm sure that they would just lose something on a TV-size screen. When you're webslinging and flying from building to building it's just got to be on as big a screen as possible! This third movie in the series was no exception and even though it was good, I'm not sure it was the best in the trilogy.

For those who haven't seen the movie yet I don't want to ruin the plot but if you've seen any of the trailers at all then you know that our hero Peter Parker succumbs to the lure of the dark spidey suit and rather loses his boyish charm for awhile there. Actually, he turns into a swaggering pompous ass if I am to be perfectly honest!

But, it's still a good movie in spite of the fact that it made me cry. Yep, I will admit it, I was the one at the end wiping the tears away from my eyes and trying to make sure that no one else saw me sniveling at a Spiderman movie of all things! Do me a favor and don't tell anyone what a soft-touch I am, I would hate to ruin that tough reputation I have going!

Anyhow - for those who have seen it, what did you think? The best Spiderman ever or the one where you really wanted to jump out of your seat and give Peter and MJ a good shaking so that they'd wake up and stop acting like idiots? And am I the only one that cried??
Posted by Linda at 5/19/2007