Off to the Black Parade 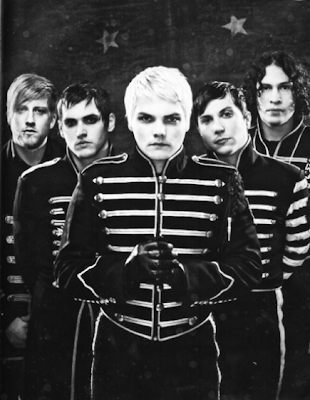 The long-awaited anticipation is almost over as My Chemical Romance takes over the DCU Center in Worcester, Massachusetts tonight at 7:30 p.m. I believe that Amanda has lived and breathed nothing but MCR for the past several months and I just hope that the actual concert finally gives me a little relief, though I have the sneaky feeling that there will be over-excited recounts over and over and over again.

It's times like these, when I am going to a sure to be ear-splittingly loud rock concert with three teenagers (one who has taken to squeeing like the ultimate fan-girl lately) that I really have to question my sanity. Seriously question my sanity!

I was just sitting here trying to picture either of my parents ever taking me to a rock concert when I was a teenager and that's an image that I just can't conjure up at all! Of course, my parents were listeners of country music back when Johnny Cash, Slim Whitman, Jim Reeves, and the like were considered the "kings" so even The Beatles were over the top for them. For them to have taken me to see my favorite band when I was a teenager (I think it was Electric Light Orchestra at the time), would have been a major miracle and you can bet I would have been eternally grateful and helped out as much around the house as possible until I felt I had paid them back for such a totally awesome thing (Amanda, you getting all this??).

I'm sure we'll be getting back at some ridiculous hour so I suspect that my Wordless Wednesday post will be late but I took the day off from work (see, I'm not totally crazy!) and can spend the day looking at everyone's pictures while the ringing in my ears subsides and Amanda continues to squee.

In the meantime, here's a picture of three really happy teenagers (if Dan looks confused it's because he's trying to figure out his new camera) and I'm sure that there will be more to post after the concert. Lots, lots more to post ... 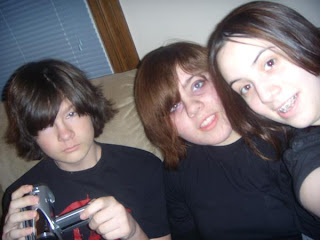 Dan, Amanda, and Nicole looking forward to The Black Parade
Posted by Linda at 5/08/2007