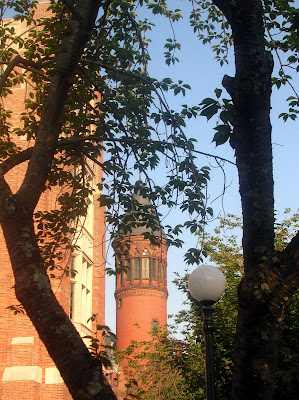 Last night was one of those picture perfect New England Spring evenings that we're lucky enough to get one or two of anymore; beautiful sunshine, moderate temperatures, no humidity, and just enough of a breeze to keep any annoying bugs away. It was the perfect evening for the 2007 Pops Concert which was held outdoors at Norwich Free Academy, the very picturesque high school that Amanda attends.

This was Amanda's third concert of the year which featured Combined Percussion and Concert Band and the first of what is, hopefully, an annual tradition of being held outdoors. As I sat comfortably on a folding chair on the lawn of the Cranston Building amongst all of the other family, friends, and fellow students of those playing in the band I reflected on how very quickly Amanda's freshman year had flown by. It just didn't seem that long ago that I was sitting in Slater Auditorium on December 13th enjoying the Holiday Concert but obviously it was. My how time flies ...

After a brief performance by the Combined Percussion, the band began with the 42nd Street Overture followed by Themes from 007, a piece that Amanda particularly enjoyed. Up next was Cole Porter's Begin the Beguine which Amanda had warned me wasn't their best piece but I thought it sounded great. She said that she had some trouble with the scales with that one but if anyone else did, you certainly couldn't tell. 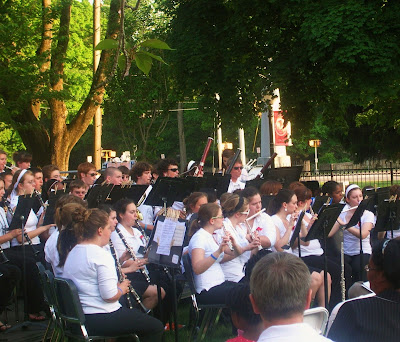 Their next selection was Superman (Suite for Concert Band), another favorite of Amanda's, and finally The Klaxon which I thought was their best piece of the night. That's probably because I really enjoy marches. The full name of the piece is actually The Klaxon: March of the Automobiles which was was composed by Henry Fillmore in 1929 for the Cincinnati Automobile Show and was originally performed on twelve automobile horns. There were, however, no automobile horns in the concert last night as the ones passing outside of the campus by Chelsea Parade didn't count!

After the recognition of the graduating Seniors, where each Senior was given the traditional gift of a music dictionary, the Seniors presented Mr. McDonald, Director of the NFA Band, with an assortment of gifts that got both laughs and applause from the audience. The concert then wrapped up with the Seniors' choice of their favorite piece of music from their entire four years, Havendance, which was performed by Concert Band II only. In other words, Amanda got to sit that one out. Again, the students did a great job with the piece and the concert ended on a very upbeat note.

This was Mr. McDonald's first year as Band Director and I must say that he did a marvelous job as every concert that I attended this year just seemed to get better and better. He obviously cares about his students and about the music that they play and it shows in every single performance.

Needless to say, I'm looking forward to hearing what the next school year brings. 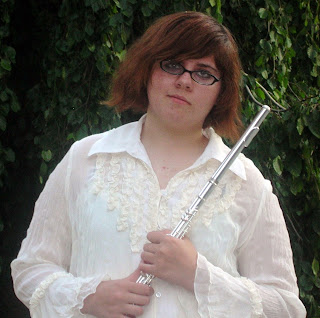