Anyone remember my Wordless Wednesday post on April 4th? I had taken a picture of the very large tree out in front of the Norwich Free Academy while waiting to attend Amanda's Spring Concert Band performance. It was still pretty cold here in Connecticut so the trees had not yet begun to bud and were still looking pretty barren.

Many thought this looked like a "ghost tree" or something out of Lord of the Rings or The Legend of Sleepy Hollow and I would have to concur. I think many a director of a Hollywood fright-fest would find this tree to be quite fascinating. 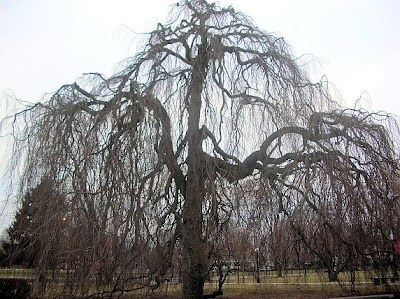 As they say "time changes everything" and that most definitely applies when it comes to trees every Spring and Fall. The below picture is the same tree and was taken last week when I was attending the outdoor Pop Concert at NFA. Big difference, isn't it? 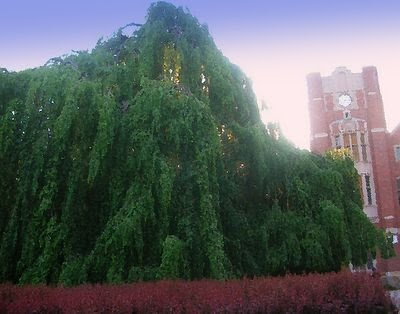 I apologize for the quality of the picture but I was obviously facing the wrong way in regards to the light and it was hard to get the whole tree in the picture. It probably would have helped if I had been able to remember the angle that was in the original picture and had tried to replicate it but, truth be told, it was a spur of the moment thought to take a picture so that I could do a comparison post and I couldn't remember from which angle I took the original.

You can't really tell from this picture but the tree is not a weeping willow as a lot of people previously thought even though it tends to look like it. It doesn't have tendrils but rather regular, rich green leaves which cover the branches that all hang down giving it the weeping willow effect.

I doubt that most kids who attend Norwich Free Academy give much thought to the beauty of the campus but it really is quite the place with quite the tree.
Posted by Linda at 5/30/2007