"We are met on a great battlefield of that war." ~ President Abraham Lincoln, The Gettysburg Address 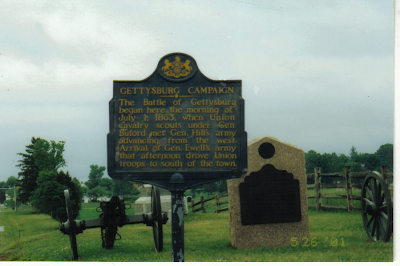 July 1st, 1863 saw the beginning of the bloodiest battle of the Civil War in a small town in southern Pennsylvania known as Gettysburg. What began as a skirmish turned into three days of fierce fighting between 160,000 Americans that in the end claimed 28,000 Confederate causalities in dead, wounded and missing as well as Union casualties totaling another 23,000.

For me to try to explain in entirety the three days of fighting that occurred in this small Pennsylvania town in the blistering heat of early July would require a virtual novel that would probably take me hours to write and you to read. It was a battle that never should have happened where it happened or when it happened but it did and it is cited as the turning point in the War Between the States.

Shortly after his success over the Army of the Potomac at Chancellorsville, Virginia General Robert E. Lee led his Army of Northern Virginia into Northern territory in the hopes of finding supplies for his troops. He also hoped to pressure Northern politicians to give up on the war in support of the growing peace movement in the North while he threatened Washington, Baltimore, and Philadelphia with his 73,000 troops.

Meanwhile, President Abraham Lincoln had replaced yet another of his incompetent commanders, Major General Joseph Hooker who resigned shortly after his defeat at Chancellorsville, with Major General George Meade who took over command of the Army of the Potomac on June 28th, 1863. Meade was ordered by Lincoln to pursue Lee and run him back out of Pennsylvania.

The battle began almost by accident as the result of a chance meeting engagement between Confederate infantry under the command of Major General Henry Heth and Union cavalry led by General John Buford just south of Gettysburg. Buford knew the importance of maintaining the high ground in battle and fought valiantly to defend the land around the Lutheran Theological Seminary. It was during the fighting on the first day that popular Union commander Major General John Reynolds died while directing troop and artillery placement when he was struck by a single bullet behind his right ear.

Though the Union was fighting a losing battle at this point, General Lee had no idea how many troops might be in reserve as his Calvary Commander, Major General J.E.B. Stuart was not to be found. Even though he did not have the "eyes" of his calvary, Lee knew that if the Union Army held the high ground they would have an advantage over the Confederate Army so he sent orders to Lt. General Richard S. Ewell, his Second Corps Commander, to take Cemetery Hill "if practicable". Not knowing what lie on the other side of the ridge, Ewell chose not to attempt the assault, a decision that resulted in a missed great opportunity for the Confederacy as had he pursued they would have not only won the day but the battle as well.

With the arrival of the remainder of the Army of the Potomac throughout the night and the early morning of July 2nd, the second day of battle saw fierce fighting between two armies at their maximum strength at Little Round Top, Cemetery Hill, and Culp's Hill. The Union lines formed what is known as a "fishhook" formation while Confederate lines stretched for nearly five miles in length.

As fighting raged in The Wheatfield and Devil's Den, the 20th Maine, under the command of Colonel Joshua L. Chamberlain, held their precarious hold of Little Round Top, an important hill at the extreme left of the Union line, with a bayonet charge that became one of the most fabled stories of the Civil War. For his gallantry, Colonel Chamberlain, a college professor from Maine who became one of the Union's most respected and well-liked officers, was awarded the Medal of Honor and given the honor of commanding the Union troops at the surrender ceremony ending the war at Appomattox Court House on April 9th, 1865.

The third day of battle saw seven hours of fierce fighting by Lee's forces in attempt to take Culp's Hill from the Union troops which ended in defeat at approximately 11:00 a.m. At that point Lee was forced to change plans and decided to launch an attack on the Federal II Corps position at the right center of the Union line on Cemetery Ridge. At approximately 3:00 p.m., 12,500 Southern soldiers in nine infantry brigades stepped from the ridgeline and advanced three-quarters of a mile across the open Pennsylvania fields towards a copse of trees that marked the Union line in an attack that became known as "Pickett's Charge". Although some Confederates were able to breach the stone wall that shielded many of the Union defenders, they could not maintain their hold and were repulsed with over 50% casualties.

Lt. General James Longstreet argued with General Lee against the attack predicting its futility, a move that made him very unpopular with the South after the war ended, but Lee insisted that it was the right move. It wasn't. "Pickett's Charge" was a bloodbath with horrendous command losses as Pickett's three brigade commanders and all thirteen of his regimental commanders were casualties of the attack; in all his division suffered 2,655 casualties . The results were an avoidable mistake from which the Southern war effort never fully recovered.

On July 4th, as weary troops faced each other across the bloody fields, Major General George Meade decided not to pursue another attack. This was an action for which he was later severely criticized and the opportunity to end the war passed as the bulk of Lee's Northern Virginia Army left Gettysburg in a driving rain on July 5th. Meade's army followed but the effort was half-hearted and Lee's troops managed to escape over the Potomac River and back into Southern territory before the Union Army was able to catch up and subdue them.

The defeat of Lee's Army of Northern Virginia electrified the North and any hopes of peace were dashed for both sides as the war continued on for almost another two years of bloody fighting with enormous losses on both sides.

There is no way to describe what it feels like to visit this hallowed ground. I have been to Gettysburg four times - the first two when I was stationed at McGuire Air Force Base in New Jersey in the late 70's; another time in July of 1999 with my cousin Amy and son Michael; and a fourth time with Amy in May of 2001 as the final leg of our "Battlefield Vacation". I hope to go again several times over.

I have taken the 19.5 mile auto tour route with a pre-recorded tape for a guide; I have taken the two-hour Battle of Gettysburg tour on an open air Double-Decker bus; and I have toured the battlefield on horseback which allowed me the opportunity to see the view across Seminary Ridge towards Cemetery Hill just as Lee, Longstreet, and Pickett might have seen it on the morning of July 3rd - minus, of course, the incoming artillery fire. Each and every time I have been blown away by the magnitude of what happened on those fields and in those woods and I leave with a greater sense of respect and awe for those men who died fighting to keep our country as one Nation under God.

By the same token, I also understand how desperately the Confederacy believed in what they were fighting for and just how noble their cause was, too. It boggles my mind to know that brother fought brother - neighbor fought neighbor - and each believed firmly that God was on their side. Go to Gettysburg - walk amongst the thousands of monuments left to those men who died on the fields there - close your eyes and picture the ground running red with their blood - and then come back and tell me you felt nothing. I will be happy to call you a liar.

In conclusion, I would like to leave you with the words of President Abraham Lincoln's Gettysburg Address to reflect upon as we approach our Fourth of July holiday:

"Four score and seven years ago our fathers brought forth on this continent a new nation, conceived in Liberty, and dedicated to the proposition that all men are created equal.

Now we are engaged in a great civil war, testing whether that nation, or any nation, so conceived and so dedicated, can long endure. We are met on a great battlefield of that war. We have come to dedicate a portion of that field, as a final resting place for those who here gave their lives that that nation might live. It is altogether fitting and proper that we should do this.

But, in a larger sense, we can not dedicate—we can not consecrate—we can not hallow—this ground. The brave men, living and dead, who struggled here, have consecrated it, far above our poor power to add or detract. The world will little note, nor long remember what we say here, but it can never forget what they did here. It is for us the living, rather, to be dedicated here to the unfinished work which they who fought here have thus far so nobly advanced. It is rather for us to be here dedicated to the great task remaining before us — that from these honored dead we take increased devotion to that cause for which they gave the last full measure of devotion — that we here highly resolve that these dead shall not have died in vain — that this nation, under God, shall have a new birth of freedom — and that government of the people, by the people, for the people, shall not perish from the earth."