1. I have to post these rules before I give you the facts.
2. Each player starts with eight random facts/habits about themselves.
3. People who are tagged need to write their own blog about their eight things and post these rules.
4. At the end of your blog, you need to choose eight people to get tagged and list their names.
5. Don’t forget to leave them a comment telling them they’re tagged, and to read your blog.

Seems to me that I have told you folks more things about myself than you really care to know so I decided to take a slightly different tack with this meme and post 8 random facts about my girls, Amanda (to the left) and Jamie (to the right), for those who aren't familiar with them by now! 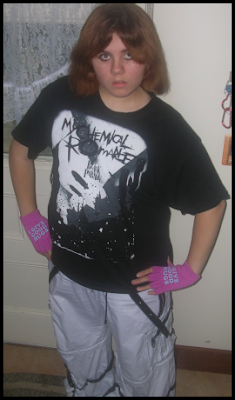 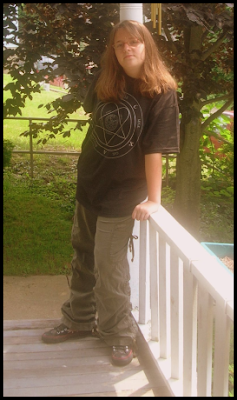 1. Amanda is 13 months, 8 days, and approximately 2 hours older than Jamie.

3. Amanda plays flute in Concert Band; Jamie sang in chorus at her school in Kentucky.

5. Amanda is more of an alternative rock fan who listens to Fall Out Boy, 30 Seconds to Mars, and, of course, MCR while Jamie is old school all the way with AC/DC, Led Zeppelin, and Queen as some of her favorite bands.

6. Amanda's hair is very thick with a natural wave; Jamie has thinner hair that is very straight.

8. Neither girl likes needles and if I take either one of them to my weekly iron infusion they will both avert their eyes and squirm until the nurse has the IV in my arm and all taped up. They do the same thing when the IV is removed whereas I have no problems watching the whole process and needles don't bother me in the least.

There we have it - eight random facts about my two oftentimes very different daughters! Sometimes even I have to wonder how it is they have the same parents but, trust me, they do!

I am now supposed to tag eight more people so I shall tag ... hmm, let's see ... I shall tag Callie Ann in Oregon, Akelamalu in England, Gracie in her new home in California, Claire if she ever gets her Internet working again, Sarge Charlie and Empress Bee formerly of Florida and now enjoying a regular meat & three in Podunk, Georgia, Joan before she jets over to Ireland, and lastly - even though he doesn't do memes from what I can tell but he could certainly do one on the personal blog corner of his "techy" blog - I shall tag Ed of The Pisstakers. I figure the man can stop searching for the funny stuff in tech and web news long enough to give us eight random facts about himself; he can call this my thanks for all those great mini-reviews he's been doing for me every week as part of his BlogLog Sundays.
Posted by Linda at 6/10/2007