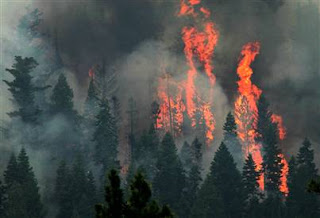 One of my very favorite places in all of the country has been steadily destroyed by smoke and flames since Sunday when a forest fire (thought to be sparked accidentally by human activity) broke out in the Angora Lake region of South Lake Tahoe, California.

Over 3,100 acres - about 4.7 square miles - as well as 220 homes and other structures have fallen victim to the fast-moving flames which, according to the Lake Tahoe Basin Management Control Unit, are currently 44% contained. Over 1,809 personnel have been battling a fire that they hope to have fully contained by July 3rd though they still face the possibility of high winds in the region over the next three days which could cause the flames to jump the fire lines again. 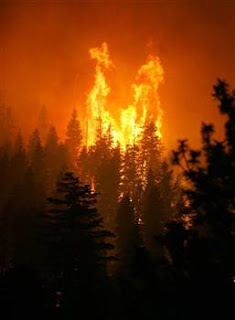 “This is the biggest disaster that has happened to this community in, probably, forever,” said Lt. Kevin House of the El Dorado County Sheriff’s Department in a televised interview.

I'm going to have to agree with Lt. House as it has always been my belief that Lake Tahoe is one of the most beautiful areas in the country and there is no doubt that a fire of this magnitude will leave scars on the area for a very long time to come.

Some of my best memories of my years in California are from various trips to Lake Tahoe with not only friends I had made in California but with my Mom & Dad when they came out to visit when I lived in Stockton. No trip to California was ever quite complete without a trip to Lake Tahoe, though I'm sad to say that my last trip out didn't provide the opportunity for a drive through the mountains to visit a place I have come to love.

The shores of Lake Tahoe were the home of the Washo Indians for thousands of years before John C. Frémont, an American explorer dubbed "The Great Pathfinder", and his guide Kit Carson first spied the lake on an expedition in the Sierra Nevadas on February 14th, 1844 from an area now known as Carson's Pass on Route 88. The first non-indigenous man to view Lake Tahoe from what is now Highway 50, my preferred route of travel, was John Calhoun Johnson, another Sierra explorer.

There is just no way to describe the beauty that lies before you as you round the last turn on State Highway 50 from Sacramento and look out towards the lake - which is still 10 miles in the distance. Lake Tahoe is the second deepest lake in the United States with its depth plunging to 1,645 feet. It's 22 miles long, 12 miles wide, and has 71 miles of shoreline, two-thirds of which lies in California. Is it any wonder that Mark Twain, when visiting the lake in 1861 for several weeks declared: "The eye never tired of gazing, night or day, calm or storm."?

I came this close to taking a job as a dispatcher at the City of South Lake Tahoe Police Department in the late 80's before I remembered that I didn't really like the cold weather in Connecticut so how much more would I not like it in a place that has an average winter snowpack of 225 inches, or nearly 20 feet! In retrospect, though, I always wonder if that was the wrong decision and how different my life might be now had I taken that job. I guess I will never know.

Though it has been way too many years since I've had the pleasure of coming around the bend on Highway 50 and having my breath taken away, yet again, by the natural beauty that stretched out before me it truly pains me to watch the news reports of what is happening to that beautiful land. Rather than the fiery images above this is how I will always choose to remember Lake Tahoe: 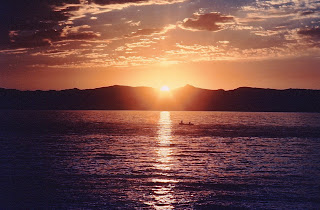 I hope they are able to get that fire under control soon without too much further loss of land and property. Best wishes to all the brave firefighters and to those who call Tahoe home.
Posted by Linda at 6/27/2007