On this date in history, June 25th, 1876 Lieutenant Colonel George Armstrong Custer and the 265 men of the 7th United States Calvary Regiment under his command lost their lives in the Battle of Little Bighorn, forever to be known as Custer's Last Stand.

A brash young man who attended the U.S. Military Academy at West Point, Custer first proved his brilliance and daring as a calvary officer with the Union Army in the Civil War. Leading the Third Calvary Division in General Philip Sheridan's Shenandoah Valley campaign, Custer was sent to pursue General Robert E. Lee's Army of the Confederacy as it fled from Richmond, Virginia and he himself received the Confederate flag of truce when Lee surrendered at Appomattox Courthouse.

At the end of the Civil War, Custer was commissioned to the western frontier as part of the U.S. Army's effort to impress and intimidate hostile Plains Indians who had very good reason to be hostile. After the discovery of gold in the Black Hills territory in 1874, the sacred land that had been ceded to the Sioux ten years earlier was overrun by white miners looking to get rich quick. Although the 1868 second treaty of Fort Laramie clearly granted the tribe use of the Black Hills, the U.S. government reneged on the deal and ordered the Sioux to return to their reservation.

Custer's division of the 7th Calvary was sent on an expedition to locate and rout tribes gathered under Chief Sitting Bull, the great warrior of the Sioux and Cheyenne, who was believed to be camped in the Little Bighorn area. While Custer's commanding officer, Brigadier General Alfred H. Terry, branched off with the majority of the 7th Calvary down the Yellowstone River, Custer and his division followed the Rosebud River with orders to meet up at the mouth of the Little Bighorn where they would combine forces and push the Sioux and Cheyenne back to their reservations. 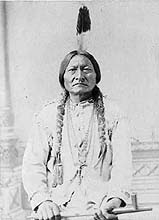 Finding a group of about forty warriors encamped on the Little Bighorn River in Montana, Lieutenant Colonel Custer decided to ignore orders and wage an immediate attack rather than wait for General Terry and the rest of the 7th Calvary. Dividing his forces into several groups Custer headed out not realizing that the number of the warriors in the village outnumbered his troops three times. He also didn't realize what kind of terrain he would have to cross before making his assault and found himself having to negotiate a maze of bluffs and ravines.

His troops were quickly encircled by the Sioux so Custer ordered his men to shoot their horses and stack the carcasses to form a wall. This provided very little protection against bullets and in less than an hour, the five companies under his immediate command were slaughtered in the worst military disaster ever. Nearly a third of the men of the 7th Calvary, including Custer and his brother, died at the Battle of Little Bighorn. a stunning victory for the Sioux.

After the battle the Sioux and Cherokee stripped the bodies and mutilated all of the uniformed soldiers believing that the soul of a mutilated body would be forced to walk the earth for all of eternity and could never ascend to Heaven. However, because Custer had been wearing buckskins and not a uniform, the Indians mistakenly thought that he was not a soldier and neither scalped nor mutilated his body, instead they merely stripped and washed it and then left it on the battleground. Eventually a myth emerged that Custer had been left untouched because of his reputation but more than likely it was simply because the warriors had no idea who Custer was and thought he was an innocent and not a member of the Army.

Harsh retribution was soon brought down upon the Indian Nation as news of the death of a popular Civil War hero on the very eve of the country's Centennial spread. Though many Native Americans surrendered to the federal authorities, Sitting Bill fled to Canada in 1877 and sought refuge there for four years before returning to the United States on the brink of starvation.

Returning to the Standing Rock Agency in North Dakota, he fought for the sale of tribal lands and participated in the Ghost Dance Movement - a cultural and religious awakening among Native Americans that "expressed a desperate longing for the restoration of the past; a return to a life free of hunger, epidemic disease, and the bitter warring and divisiveness that accompanied the Indians' subjugation by whites."

Fearing the end of white dominance in the West, federal authorities attempted to take custody of Sitting Bull in 1890 but his followers were still loyal and a scuffle ensued. Thinking that the Army meant to kill Sitting Bull, shots were fired between the factions and both Sitting Bull, who was shot in the head, and his son Crow Foot died in the mêlée.

Someday I hope to be able to visit the Little Bighorn Battlefield National Monument just as I have been fortunate enough to visit many of our Civil War Battlefields throughout Virginia, Maryland, and Pennsylvania. I think it's important to know the history of one's country, both the tragic and the heroic, as then you can have a greater appreciation of what you have and how you came to have it. Many people died to make this Nation the great country that it is and it's only fitting that we honor and remember them. 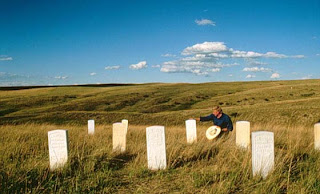 As Winston Churchill once said, "Those who fail to learn from history are doomed to repeat it." Hopefully tragedies like the one at Little Bighorn taught us many valuable lessons, though sometimes I'm not so sure ...
Posted by Linda at 6/25/2007