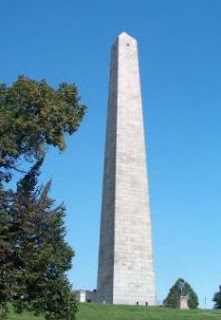 Bunker Hill Monument, Boston, Massachusetts
On this date in history 232 years ago, American forces fought and lost one of the more important battles of the American Revolution on a 75-foot high spot of land called Breed’s Hill on the Charlestown Peninsula section of Boston, Massachusetts. Even though the battle was fought on Breed’s Hill it has always been referred to as The Battle of Bunker Hill, which was the 110-foot high hill standing behind Breed’s Hill.

The Battle of Bunker Hill was fought between 2,500 British regulars under General William Howe and 1,400 New England militiamen under the command of Colonel William Prescott, of Massachusetts, and General Israel Putnam, of Connecticut fame.

On a cloudless afternoon on June 17th, 1775, British troops struggled up the hill over uneven soil in knee-deep grass with each man loaded down with a knapsack, blanket, and ammunition totaling 125 pounds. With General Howe leading, the British troops launched an attack up the slope on the waiting American forces.

After three frontal assaults against accurate sharp-shooters, the battle finally ended with the British victorious but at great cost to them. Of the 2,500 British troops engaged in battle their losses stood at 42% with 228 dead and 826 wounded; 92 of those were officers. On the American side losses totaled approximately 450 of which 140 were killed and 30 were captured.

Even though Bunker Hill was a loss for the Americans it changed the attitude of Britain significantly. The ferocity with which the Americans fought and the losses that their own troops suffered gave Britain pause to sit up and take notice of what they had previously thought to be simply a small group of upstarts who could easily be squashed with their superior forces.

The American Revolution raged on until the surrender of Lord Charles Cornwallis, British Commander of the Southern Campaign, at Yorktown, Virginia on October 19th, 1781 but didn’t officially end until the Treaty of Paris was signed on September 3, 1783.

Most Americans don’t realize that it took over nine years for our country to emerge as an independent nation. From the time of the first battle on October 10th, 1774 at Point Pleasant, Virginia until the British troops occupying New York left in November of 1783 it was just a little over nine years. Nine years.

People seem to be under the misguided impression that America gained her independence on July 4th, 1776 as that is the date we celebrate our birthday as a nation but that just goes to show that it’s easier to say “We’re free! We’re independent!” then to actually be free and independent. Nine years is a long time - no matter how you look at it.

Freedom doesn’t come easy nor does it come fast which is something our forefathers learned the hard way. It also seems to be something that we currently seem to have forgotten while we take for granted those very same freedoms that so many lost their lives for over 230 years ago and continue to lose their lives for today.

Just something to think about on a Father's Day afternoon. 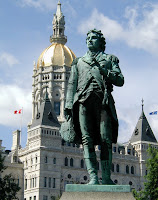