********************
It would appear that I have been tagged with the "Eight Random Things" meme for a second time courtesy of Gran - (Angela) over at Gran's Memory Keeping Corner. Last time I was tagged I managed to sidestep boring everyone to tears with eight things about myself by writing eight things about Amanda and Jamie. Very sneaky, if I do say so myself!

This time around I think I am going to dodge the bullet again by writing eight random things about the place I have resided in for the last seven years - Norwich, Connecticut.

1) Norwich was founded in 1659 by settlers originally from Old Saybrook, Connecticut led by Major John Mason and Reverend James Fitch. They purchased the land from Chief Uncas, known as Le Cerf Agile ("The Bounding Elk"), Sachem of the Mohegan Tribe. At the time of the American Revolution, Norwich was the 12th largest city in the American colonies. 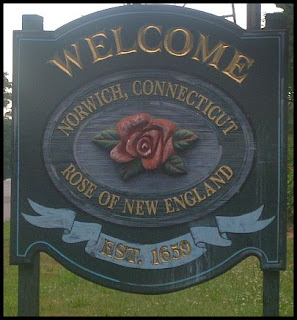 2) During the American Revolution Norwich supported the cause for independence by supplying soldiers, ships, and munitions. One of the most infamous figures of the Revolution, the traitorous Benedict Arnold, was born in Norwich. Another Colonial era note-worthy who was born elsewhere but made his home in Norwich was Samuel Huntington, a lawyer who served as a delegate to the Continental Congress and Signer of the Declaration of Independence as well as eventually holding the title of President of the United States in Congress Assembled. Huntington eventually went on to be Governor of Connecticut serving from 1786 until his death in 1796. 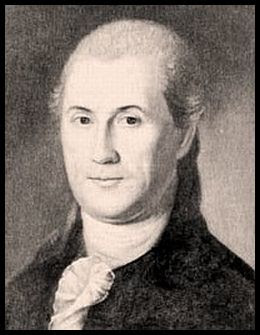 3) Norwich is located at the confluence of three rivers - the Yantic River, the Shetucket River, and the Thames River. For that reason our community college is named Three Rivers Community College! 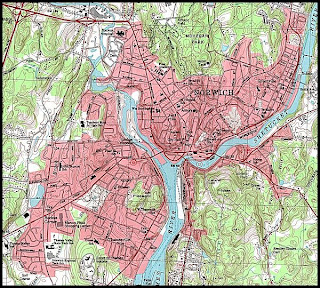 4) In 1860 Abraham Lincoln, while promoting the reelection of Governor Buckingham as well as campaigning for President himself, stayed in the Wauregan Hotel, a grand hotel that rivaled anything between New York and Boston. Originally built in 1855 it was recently restored to much of its former splendor and now provides affordable apartments to qualified residents in the downtown area. Had Amanda not come home to live with me when she did, I might have been living there myself now but alas, a historic residence was not in the cards for me. 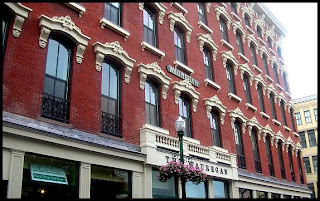 5) Norwich was nicknamed "The Rose of New England" in the 19th Century when James Lloyd Greene (Lord knows who he was) declared that the fives hills of Norwich, when viewed from the Thames River, looked like "the petals of a rose". Obviously the citizens of Norwich approved of Mr. Greene's description of Norwich as it has stuck and the rose is used as a symbol all over town, including on Police & Fire Department uniform patches. 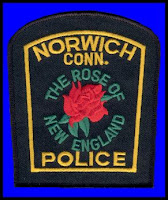 6) As "The Rose of New England" it is only fitting that Norwich have a rose garden - which it does! Located in Mohegan Park, a 385+ acre park located smack in the middle of the City, the garden occupies two acres on a gentle slope near one of the entrances to the park and features 1,500 rose bushes in 120 varieties. It was dedicated on July 11th, 1948 and boasts a lovely gazebo which is the site of many weddings during the Spring and Summer months. 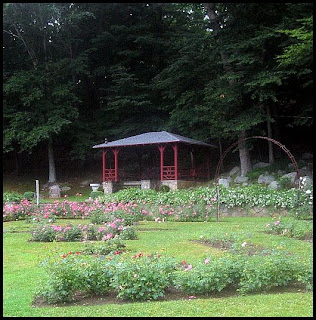 7) Norwich City Hall was completed in 1873 after three years of construction at a cost of $250,000 - big bucks for back then! Designed in the French Second Empire Style it has an extravagant three-dimensional style architecture. A four-sided clock tower was added in 1909 which enhanced the beauty of the building while the basement contained dungeon-like cells that were used as the city jail until construction of a separate building for the Police Department. In 1999 the entire building underwent renovations which included the construction of a European style plaza at the front entrance to enhance the building. It is definitely one of the most beautiful structures in Norwich and is listed in the National Register of Historic Places. 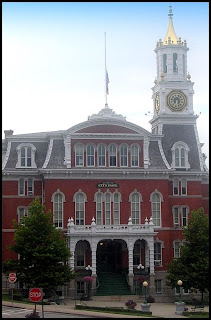 8) The Norwich Hospital for the Insane opened in October of 1904 with one building on a parcel of land on the Thames River just south of Norwich. Renamed as Norwich State Hospital in 1926, by 1959 it sprawled over 900 acres with an average daily population of over 2,700 patients and close to 1,500 employees, over 800 of them being nurses. The peak of the hospital’s use was in 1955, when 3,186 patients were living on premises. In October of 1996, the Norwich State Hospital closed its doors and the land remains unused straddled between Norwich and the neighboring town of Preston. The grounds and buildings are said to be haunted which doesn't surprise me at all considering what went on there for years and the agony that many of the patients there felt. Currently the grounds sit unused while the once architecturally impressive buildings fall into decay and ruin. Eventually people might quit squabbling about what to do with the land but for now it's a place that many a ghost-hunter wishes to explore. I live about 2-1/2 miles down the road from it but have NO desire to go exploring the place at night! 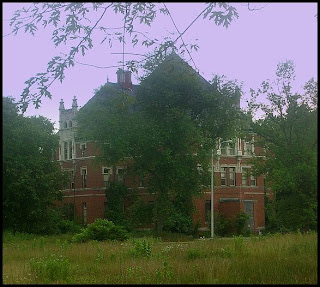 Now that I've told you a bit about Norwich, the rules of this meme state that I am supposed to tag eight more people but I'm going to sidestep that one, too, and just tell you that if you like this meme and want to write about eight random things of your own then go for it and let me know so that I can come over and read your post!

Maybe you could write about your town and we could start a "town exchange"!
Posted by Linda at 7/06/2007