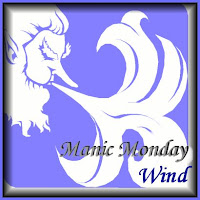 Morgen of It's a Blog Eat Blog World and master of Manic Monday has decreed that 'Wind' is the theme of the week so I thought this would be the perfect time to roll out one of my very favorite musicals of all time - Man of La Mancha - a play which I have had the privilege of seeing twice with Robert Goulet playing the role of 'Don Quoxite'. Of course, this was back when I could afford to go see plays so obviously it's been a long, long time but it still remains one of my very favorites!

For those not familiar with the play, Man of La Mancha is a musical in one act which tells the story of the "mad" knight 'Don Quixote' in the form of a play within a play. While awaiting a hearing by the Spanish Inquisition for foreclosing on a monastery, Miguel de Cervantes and his manservant are attacked by their fellow prisoners who then set up a mock trial as a means to take over the possessions Cervantes has with him. Cervantes asks to offer up a defense in the form of a play, which will be performed by himself, his servant, and the other prisoners, in order to be allowed to keep a manuscript that the prisoners are threatening to burn. The prisoners agree and Cervantes quickly transforms himself into 'Alonso Quijana', an old gentleman who has read so many books of chivalry that he has lost his mind and now believes that he should go forth as a knight-errant. 'Quijana' renames himself 'Don Quixote de La Mancha', and sets out to find adventures with his "squire", 'Sancho Panza'.

Man of La Mancha is performed on a single set arranged to suggest a dungeon and all changes in location are created by alterations in the lighting and by the creative use of props supposedly lying around the floor of the dungeon. The reason this was done was to to encourage the participation of the audience's imagination in the enjoyment of the show and trust me - it works.

Despite the fact that this all sounds very interesting, I'm sure some of you are asking yourself at this point what any of this has to do with 'Wind', right? Glad you asked because I have an answer! Or at least I sure hope I do as I'm the one writing the post! I'm guessing that most people, when thinking of Don Quixote (if you think of Don Quixote at all!), will probably conjure up a windmill in their minds as he was the character made famous for "tilting at windmills". Oh dear - not acquainted with that saying? Then allow me to shed some light on that, too ...

In Miguel de Cervantes' book Don Quixote - first published in 1604 under the title The Ingenious Knight of La Mancha - the novel recounts the exploits of would-be knight 'Don Quixote' and his loyal servant 'Sancho Panza' who propose to fight injustice through chivalry. This would be part of that play within the play thing I referred to above as guess what manuscript Cervantes was trying to save from the prisoners? You got it, this very book! Ah-ha! This is all starting to come together, right? But still, what has this got to do with "tilting at windmills", you wonder?

Very simply, at one point in 'Don Quixote's' quest to win the love of a good woman (ah, romance!) and right some of the injustice of the world, our hero imagines himself to be fighting giants when he is, in reality, attacking windmills ... 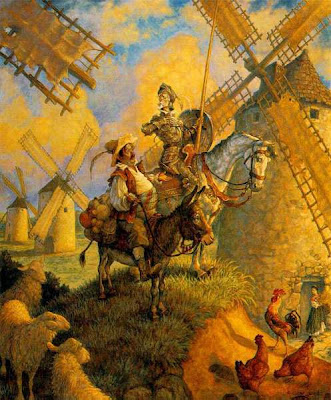 "Just then they came in sight of thirty or forty windmills that rise from that plain. And no sooner did Don Quixote see them that he said to his squire, "Fortune is guiding our affairs better than we ourselves could have wished. Do you see over yonder, friend Sancho, thirty or forty hulking giants? I intend to do battle with them and slay them. With their spoils we shall begin to be rich for this is a righteous war and the removal of so foul a brood from off the face of the earth is a service God will bless."
"What giants?" asked Sancho Panza.
"Those you see over there," replied his master, "with their long arms. Some of them have arms well nigh two leagues in length."
"Take care, sir," cried Sancho. "Those over there are not giants but windmills. Those things that seem to be their arms are sails which, when they are whirled around by the wind, turn the millstone."

It was from this passage that the phrase "tilting at windmills" originated though the full form of the phrase wasn't used until towards the end of the 19th century. Basically the phrase describes an act of futility or, in other words, maybe just to dream the impossible dream - which is also a song from Man of La Mancha that you can enjoy by hitting the play button below.


So, now that I have taken the very circuitous route around the word 'wind' today perhaps you'll excuse me as I've got a few windmills to go tilt at myself! Have a great Monday - Manic or not!