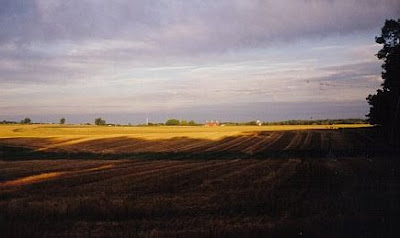 For this week, TNChick, gave us the Photo Hunter theme of "Shadows". Even though I used this picture recently in one of my slideshows for my post on The Battle of Gettysburg, I thought it might be nice to use it again.

This pictures shows shadows across the fields where Pickett's Charge took place on July 3rd, 1863 - land that stretched three-quarters of a mile from Seminary Ridge near Spangler's Woods where the Confederates were staged to Cemetery Ridge where the Army of the Potomac waited.

Commander of the Confederate Army General Robert E. Lee ordered a full frontal attack on the Union troops and 12,000 to 15,000 Southerners led by Major General George E. Pickett charged across this very field towards the Union center . The plan proved disastrous, however as only 5,000 Southerners survived the charge and shortly afterwards Lee retreated to Virginia ending the Battle of Gettysburg, the bloodiest battle of the Civil War.

As one of the darkest days in the history of our country, shadows across this field seem only fitting.