Scraping the Bottom of the Barrel & other assorted sayings!

***********************
Mark my words, I do love a good turn of a phrase and tend to use clichés and sayings a lot - it makes me happy as a clam when I can find an expression that hits the nail on the head. I figure if somebody before me has said it better than I can then why not borrow their words rather than stumble over my own? I would think the original utterer of the phrase would think it was the cat's pajamas or the bee's knees to have someone else use their words. I wouldn't bat an eye if someone were to quote me; as a matter of fact, I would be pleased as punch!

Lo and behold, I had occasion to use the phrase scraping the bottom of the barrel yesterday as I was caught between a rock and a hard place when it came to our financial and grocery situation here at the House of Mouseski. Not to cry crocodile tears, but Mother Hubbard's cupboard was bare while at the same time I barely had one red cent and payday is not until this coming Thursday. I had $15.00 to my name in ye olde checking account and as I'm sure you all know, $15.00 is not going to feed two teenagers and an adult for very long at all - at least not on anything other than Ramen noodles and to do that would really be pushing the envelope - to say the least!

If I didn't get my ducks in a row and come up with some sort of cash for food to last until payday there would be the devil to pay with my two hungry teens and considering there had been virtually no food in the house since Thursday I was really under the gun. No doubt about it, desperate times call for desperate measures however there was light at the end of the tunnel as I remembered the only resource of cash I had left in the house ... my piggy bank! 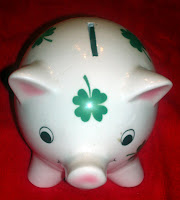 Thankfully I have gotten into the habit of tossing any change I might have left over into this little piggy to save for a rainy day and at this point, as far as my finances were concerned, there was no room to swing a cat so that rainy day had arrived in spades. In addition to this little fella there is another larger piggy bank downstairs but that one held mostly pennies so I had to wing it with just the one. After shaking all the change out (because of course the key is lost!) ... 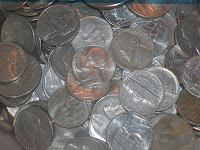 ... it was time to fish or cut bait so Jamie and I hightailed it down to the local Stop & Shop grocery store where they had a Coinstar machine. As a rule, I hate these machines and would rather roll the coins and take them to the bank myself but it was a Saturday afternoon and my bank definitely observes banker's hours on the weekend. It really got my goat that I had to pay 8.9 cents on the dollar to use the machine but they had me over a barrel and I didn't see where I had much choice. In order to give the girls three squares a day I needed to pay the piper his due otherwise I was poor as a church mouse and didn't have a pot to piss in.

With our small slush fund in hand, Jamie and I perused the aisles making sure that we could get the most bang for our buck. For the love of Pete, though, it was certainly frustrating! The bottom line was we had less than $70.00 (counting the money in my checking account) to buy groceries for three people for six days and it seemed a bit of a sticky wicket! We certainly weren't going to be eating high on the hog or from soup to nuts but it was time to roll with the punches as beggars can't be choosers and it didn't seem that there was going to be any manna from heaven falling at our feet!

It was with a wing and a prayer that we approached the check-out registers, hoping against hope that we hadn't broke the bank with our meager purchases. I waited with bated breath as the cashier rung up the items in our cart and for awhile there it seemed to be touch and go but when all was said and done we were close but no cigar as the total was 72 cents over what we had after Coinstar had taken its pound of flesh. I forked out the remainder via debit card (along with getting $10 back for gas) and then we loaded up the whole kit and caboodle, hit the dusty trail, and made our way home.

So for the next few days at least I can keep the wolves from the door and everything is hunky dory. I must say, though, that it would be nice to someday be in high cotton and have more than two nickels to rub together but alas, I can tell you straight from the horse's mouth that the writing is on the wall and 911 isn't a job you go into for the money so bringing home the bacon is always going to be a dicey situation and that's no cock and bull story!

Oh, and just for the record, writing this post was a hoot and you can bet your bottom dollar I'd do it again in a New York minute!
Posted by Linda at 7/15/2007