"Some people spend an entire lifetime wondering if they made a difference in the world. But, the Marines don't have that problem." ~ Ronald Reagan

********************
Today is going to be one of the toughest days in the life of my blogging friend, Dixie. Even though she has known for quite some time that this day was coming and has had plenty of time to prepare for it, that isn't going to make it any easier or any more bittersweet.

Today is the day that Dixie's son, Matt, begins his journey to becoming one of the few and the proud as he ships out to Parris Island, South Carolina to begin basic training as a U.S. Marine. 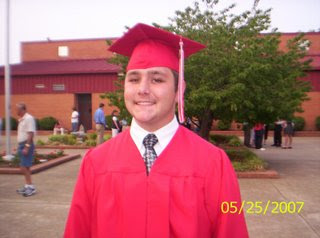 The United States Marines hold a proud heritage which began on November 10th, 1775 when the Continental Congress drafted a resolution to create a new military unit called the Continental Marines. This resolution was drafted in a popular Philadelphia inn called Tun Tavern and was later approved by the entire legislative body.

Since then the Marine Corps has fought in every single American armed conflict, from the American Revolution to Operation Iraqi Freedom, where they have been revered and feared for their prowess in combat and their dedication to duty. The Marines are considered the world's premier warriors, head and shoulders above the crowd, and there is a very good reason for that. 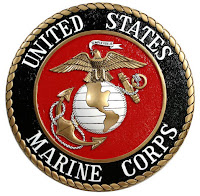 That very good reason lies in each individual Marine. A person doesn't join the Marines, though roughly 40,000 try each year; a person becomes a Marine through the ordeal of training that sculpts each individual in body, mind, and spirit. Once an individual has earned the title and enters the Brotherhood of Marines he or she then draws upon the legacy of the Corps - the legacy of honor, courage, and commitment.

It is those three values -

that make up the bedrock of the character of each individual Marine and this in turn makes up the foundation of the Corps. Each of these three values has been handed down from generation to generation and are what makes the U.S. Marines Corps the Warrior Elite - the most respected and revered fighting force on earth.

Dixie's son Matt has chosen one of the most honorable paths that a boy can take on his way to becoming a man and though her heart will be breaking when she gives him that last hug and kiss good-bye, Dixie can take the ultimate pride in knowing that her son made a conscious and free decision to dedicate his life to the service of his Country and his fellow man. He leaves her today a boy and yet will return to her a man who has earned the right to stand tall as one of a few good men. 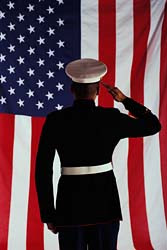 I salute both Matt and Dixie for their service to our country. May God watch over them both not just today but always. Semper Fidelis!

Almighty Father, whose command is over all and whose love never fails, make me aware of Thy presence and obedient to Thy will. Keep me true to my best self, guarding me against dishonesty in purpose and deed and helping me to live so that I can face my fellow Marines, my loved ones, and Thee without shame or fear. Protect my family.

Give me the will to do the work of a Marine and to accept my share of responsibilities with vigor and enthusiasm. Grant me the courage to be proficient in my daily performance. Keep me loyal and faithful to my superiors and to the duties my Country and the Marine Corps have entrusted to me. Help me to wear my uniform with dignity, and let it remind me daily of the traditions which I must uphold.

If I am inclined to doubt, steady my faith; if I am tempted, make me strong to resist; if I should miss the mark, give me courage to try again.

Guide me with the light of truth and grant me wisdom by which I may understand the answer to my prayer.

If you haven't already done so and would like to leave Dixie a message of support and encouragement, please go by Dixie's Heart & Soul and give her a big ole' OOH-HA for Matt!
Tell her an ex-Airman sent you and couldn't be prouder!
Posted by Linda at 7/22/2007

Email ThisBlogThis!Share to TwitterShare to FacebookShare to Pinterest
Labels: Dixie, Matt, US Marines