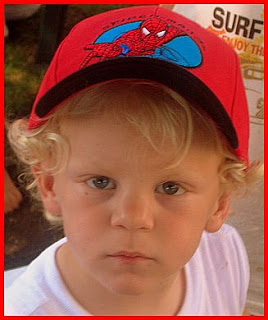 Mathew & his Spidey hat from Grandma (me!)

Amanda, Jamie, and I made the short jaunt over to Rhode Island yesterday for a combination birthday party for my grandson Mathew, who turned two on June 12th, and my step-grandson Christopher, who will turn 4 on July 28th. As is common with families who have children that have birthdays close together, it made sense to have one big party rather than two individual ones and the boys, who are quite close, didn't mind at all. 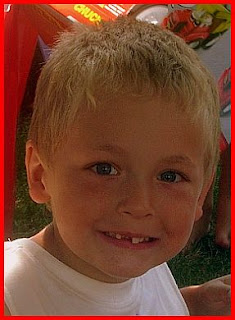 Christopher takes a break from the presents!

The highlight of the party for Aunt Amanda was the chance to play "Dead!" by My Chemical Romance on Mike's new XBOX-360 version of Guitar Hero II. The song isn't available on the PS2 version of the game and she had been chomping at the bit to get over to Mike's house to play it as soon she heard he had it. Not to be outdone by her sister, Aunt Jamie then played "Billion Dollar Babies" by Alice Cooper and was quite pleased with her own performance. I sat this one out as I didn't want to embarrass myself in front of my son who plays most songs at the expert level while I can barely play three on medium before getting boo'd off the stage. A grandmother has to know her limitations, right?

On the way home we stopped in at Buttonwood Farms Ice Cream Stand in Griswold where I took out a loan to buy three cones. Well, it wasn't quite that bad but it almost seemed like it as the prices seemed to have gone up considerably since I had been there last summer. However, at least you're paying for really good ice cream in large servings in fresh-made waffle cones but over $15 for three cones? Ouch! No wonder we only go once a year when Jamie is out!

When I returned home I checked my email to find that I had been granted an award by The Blog Fairy for having a "Blue Ribbon Blog" and she left me the following cute little badge that will find a place of its own over on my already-bogged down sidebar! Thanks, Blue Fairy!

Speaking of badges, what a pleasant surprise to also get an email from Sandee over at Comedy+ awarding me the Schmoozer Award. Sandee was awarded hers by Ann over at A Nice Place In The Sun and she passed it on to myself and 14 other great bloggers. What a gal!

Haven't heard of The Schmoozer Award? Actually, I hadn't either until today but come to find out it's officially called The Power of Schmooze Award and was started over at the blog Ordinary Folk. According to blog author Mike:

Schmoozing as defined by Dictonary.com is the ability “to converse casually, especially in order to gain an advantage or make a social connection.” When it comes to blogging, schmoozing is your ticket to making new friends, getting yourself noticed and building a reputation. Some bloggers are gifted with the ability to effectively schmooze and others not so much. My new friend Danielle and I would like to recognize those bloggers who exhibit strong schmoozing skills. In order to do so we’ve created the new Power of Schmooze award!

Another cool badge for my sidebar - thanks, Sandee!! In keeping with the Power of Schmooze tradition, it's now my turn to grace some more bloggers with this lovely little award and badge - people who have schmoozed their way into my heart and my life.
Now I wouldn't be at all surprised to find some of these great women being awarded more than once but if they are that just goes to show that they have the Power of Schmooze multiplied!

To wrap this up for today I'm going to post one more picture of my adorable curly-headed grandson because I can and I've been told that's what we grandmother-types are supposed to do ... right, Callie Ann?? Hope everyone had a great weekend!! 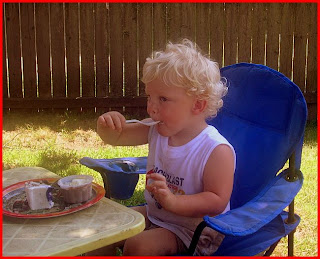 Mathew enjoys his birthday cake & ice cream
**Addendum: I am so thrilled and honored, I got double-Schmoozed when Dixie awarded by me another Power of the Schmooze Award on Monday. Thanks, Dix!!!
Posted by Linda at 7/08/2007