During the course of my 16-hour shift at work yesterday I had occasion to decide that a small smackerel of some sort of snack might be nice so I wandered from Dispatch down to the ambulance bay where the vending machines reside. After perusing the choices available to me I noticed that there were Cracker Jacks on the bottom row that looked quite appetizing. It had been years since I'd had a box of Cracker Jack, though to be honest what I got yesterday wasn't a box but a bag - a 1-1/4 ounce bag which doesn't exactly equal a whole heck of a lot of product but hopefully it would be enough to stop the rumbling that was emitting from my stomach.

I went back up to Dispatch with my bag of candy-coated popcorn, peanuts, and a prize along with a Diet Pepsi (yeah, I know that combination just sounds wrong!), sat down, opened the bag to look for my "toy surprise inside", and got to wondering about the snack that I remembered fondly from my childhood.

After work today I did a little research and found out the following: the confection was first concocted in 1896 and became known by its name when a sampler declared "That's crackerjack!" (a euphemism back then that meant great or terrific); the snack became immortalized in the 1908 song "Take Me Out to the Ballgame"; in 1912 "A Prize in Every Box!" was introduced; and 1918 saw Sailor Jack and his dog Bingo appear on the package. In 1964 the Borden Company bought out the Cracker Jack Company and in 1975 automated, high-speed, continuous cooking machinery replaced the metal tubs in which Cracker Jack was batch-coated.

I've got to think that it was sometime after that when the toy prizes in the box became rather - shall we say - lame. It used to be that half the fun of getting a box of Cracker Jack was to see what kind of prize you got. I can remember getting some fairly cool things when I was a kid and obviously there had to be quite a few as there are people who are serious collectors of Cracker Jack prizes. As a matter of fact, a complete set of 176 Cracker Jack prize baseball cards was sold for $800,000. Not too shabby I would say.

However, all of that has changed like so many things of my youth and now Cracker Jack prizes are flat little paper things that are pretty disappointing compared to some of the things you used to get when you'd open the little red and white striped package you found in amongst the popcorn and peanuts. As I held my "toy surprise" in my hand yesterday I got the feeling that this prize was going to be a bit of a let-down, too. Obviously my psychic abilities were in full-swing as what I got was this: 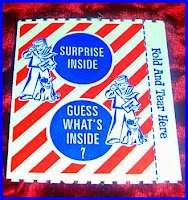 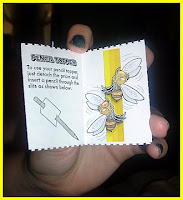 For those who are having some trouble with the print, that would be a "pencil topper" that can be used by detaching the prize and inserting a pencil through the slits. Oh goodie. I wasn't sure how I was going to be able to contain my excitement long enough to take the picture for this post so Jamie helped me out however she declined the prize when I offered it to her as thanks for her assistance. I wonder why?

I guess maybe Meatloaf was right when he sang the prophetic lyrics from his hit 1977 song "Two Out of Three Ain't Bad" "... but there ain't no Coupe Deville hiding at the bottom of a Cracker Jack box ..."

I think the best prize I ever got was a small plastic blue horse that I carted around in my jewelry box for ages until it got lost in one of the many moves made during the course of my life. Anyone else remember any cool prizes they ever got out of a Cracker Jack box?
Posted by Linda at 7/09/2007