A Year in Review

I started out with a basic blogger template (one of the green ones to be exact) but then unveiled my new personally designed template with this post on December 10th, 2006. I had wanted something more personal - more stand out - and I got exactly that from Se7en of Blogs Gone Wild! All six of my commentors at the time voiced their approval and "Super Mom" was born. Thank you once again, Se7en, for giving me some personality!

From August 21st, 2006 with a post titled "Early to bed and early to rise, makes a man healthy wealthy and wise." until January 29th, 2007's post “The wisdom of the wise and the experience of the ages, may be preserved through quotations.” I gave every single post a title in the form of a quote. I love a good quotation but sometimes it took me longer to find the quote than it did to write the post so in an effort to save myself some time I switched to using a quotation as a title only occasionally. Old habits certainly die hard!

Wednesday, January 3rd, 2007 saw my very first Wordless Wednesday post which was a picture of my son and grandson that you can see here. For those who were totally surprised that I had a son and a grandson this is proof positive that I had mentioned them previously! My first Saturday Photo Scavenger Hunt was this post on January 13th, 2007 which gives a lovely view of the dispatch center I spend a good part of my life in. If you look closely you can see the dents in the counter where I have beat my head numerous times!

Amanda's artwork first appeared on August 15th, 2006 in this post and hopefully she will continue to allow me to post drawings as she improves by leaps and bounds all the time. I'll have to have her do a "first anniversary of being displayed on Mom's blog" drawing! I'm pretty sure I can talk her into it though I've only got a little less than a month to do it and I've found you can't rush the artistic or it brings out the angst in them big-time!

The very first time I ever tried my hand at a meme was on September 21st, 2006 and you can read it here if you'd like; it's not your standard meme or what you might be used to seeing as the theme of this particular meme was: What is written on the 5th through 8th sentences on page 123 of the book nearest you? I was tagged by ECR of 24/7 for that one and I really enjoyed doing it.

During the course of the past year I have been awarded with numerous badges and awards that decorate my sidebar and which will remain there as a thank you to those who took the time to recognize my blog in one form or another. I am honored and touched by all of them and am still somewhat amazed at the number. As Sally Field might say "You like me! You really, really like me!"

When I began this blog a year ago I had no idea how very big the Blogosphere was - heck, I had no idea there even was a Blogosphere! - or how very many wonderful people there were in it. I have made some wonderful friends over the past year - people who mean the world to me and who I can't imagine my life without at this point. My blogroll seems to grow every day with more and more fantastic bloggers.

One of my regular commentors who is also an EMT at the company I work for, spent some time visiting me in dispatch the other evening and we got to talking about some of the terrific people I've met through my blog and who he, through me, has gotten to know a bit also. Bulldog doesn't have a blog himself but he has been one of my greatest supporters since day one - something I think the man deserves a medal for! - and he understood completely when I told him how much the people I've 'met' through blogging have become such a large part of my life.

I'm not throwing a pity party for my blog's first birthday party but as I told Bulldog, I don't have much of a life outside of work and being a Mom so my computer and the wonderful people I have met through it are a major part of my life. I thank you all for your support, for your encouragement, for your comments, for the laughs, for the tears and for being my audience but most importantly for being my friends. I love you all and I hope you'll stick around for the continued journey as I still try to find out Are We There Yet??

Now what's a party without some cake? Everyone dig in and, just for Miss Bee, I took the calories out so you have just as many pieces as you'd like! As soon as I'm done with my three pieces I guess I'd better start thinking about what I'm going to write about for the next year! 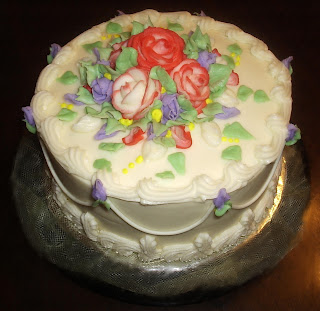