For awhile now, Amanda has been occasionally providing me artwork of hers to post as part of my blog and everyone has been very complimentary towards her in regards to what she has drawn. I'm a little biased and think she does very good work but it certainly means a lot more when it comes from other people for as they say in Guitar Hero II, - "your mom doesn't count as a fan!" I don't know why not, I'm sure that we moms and dads can be just as unbiased as the next person - right? maybe? perhaps? Okay, maybe not!
This past Wednesday Amanda once again provided me with a drawing for my Wordless Wednesday post which helped to define a statement that I had made in my post on Tuesday - "I feel like Death eating a cracker." I'm sure her depiction was nowhere near what my grandmother had in mind when she used to make this particular utterance herself but I thought it captured the spirit of the statement pretty well!

One of my regular readers and a lovely lass who has become a favorite blog-buddy, Claire of A Little Piece of Me, left a comment that read:

"OHHHHH I love it!!!!! I have said it before but she really is talented and I am jealous! I love drawing cartoons (if you remember the beaver?) but I don't have the unique twist that Amanda has to make a cartoon have that something special! T-Shirts! and other merchandise. This would be great on a mug!"

Hmmm ... could Claire be on to something here? Would people actually pay money for Amanda's artwork on merchandise? Could this perhaps be a way for her to earn some money for tuition for the School of Visual Arts in New York City that she wants to attend after high school graduation and which I will never be able to afford on my salary? Hmmm ...

Not knowing too much about this sort of thing I decided to turn to someone whom I thought might know a little something about retail being that he owns a cute little ole' shoppe of his own in downtown Dowagiac, Michigan ... Morgen of The Mo Show fame. I sent him an email and asked him what he thought of the idea and he suggested that we give CafePress.com a try as it doesn't require any start-up costs and might be the perfect place for a new artist to start out.

Taking Mo's sage advice I checked it out and it looked like it might actually be plausible as well as possible so I then ran the idea by the artist herself. At first she seemed somewhat skeptical about the whole idea but then I showed her some of the products with her artwork on them and suddenly it seemed like a great idea.

The drawing of "Death Eating a Cracker" that Amanda had done for my Wordless Wednesday post was basically just a quick sketch so she redrew the picture with a little more detail and a character who looks a little more "Death-like" though he still seems to be enjoying his cracker and coffee - or hot chocolate or tea, whatever your poison might be! The final product is this fella here: 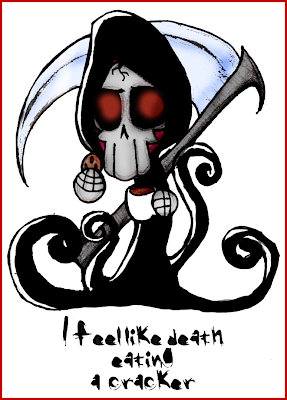 Mr. Death there is now the chief character on an array of merchandise which can be found at Amanda's CafePress on-line store that she named Artistic Intoxication and can be found by clicking here. In addition to the above drawing she also has a few things with the original "Death" character from my WW post and several other of her drawings taken from her DeviantArt account including this drawing entitled "Heart": 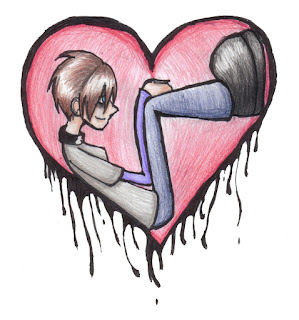 If you find yourself looking for something a little out of the ordinary for a gift for a friend or even something for yourself, I hope you'll stop by Artistic Intoxication and see what Amanda has to offer. I concede her art is not for everyone but I think that teenagers might definitely like it. But then again, what do I know, I'm one of those "biased" mothers! If you'd like to give Amanda some help in her endeavor and promote her shop for her a bit, I know she'd appreciate it!

As for me, I think I'll be getting one of those "Death Eating a Cracker" coffee mugs to take to work. Something tells me it's going to describe how I feel most mornings to a "T"!

Postscript: The lovely Claire made this nice little button for people to use on their blogs if they'd like to promote Amanda's on-line store and I think it's just adorable!

If you want to post it and can't get the code to work, please let me know and I will email it off to you! Thank you, Claire, I am so glad you've got your Internet back up and running! Not just for the button, mind you, but that's a big plus!!