Aw shucks and a meme

********************
This has been a rather hectic week at work what with a few more extra hours than usual as well as some required annual training that required even more extra hours. The combination seems to have put me behind in my blogging - not just writing but reading - but I believe that through the wonders of Google Reader I have finally managed to catch up with the 100+ posts that awaited me this afternoon and it only took me until 12:30 a.m. to do it! Now I have time to get in one post before I go upstairs to bed where I can stay until whenever I feel like getting up as there is no where I need to be until 4:30 in the afternoon. Sleeping in - what bliss!

Because I am only doing one post I need to combine a couple things so please bear with me here! First up - 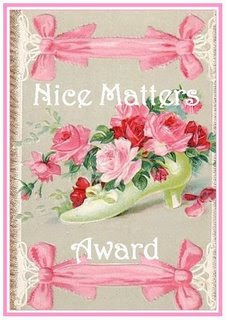 This week I was awarded the above badge by some very lovely ladies - Christine of Ephphany Sanctuary; Angela of The Life and Times of Gran, and Asara of Asara's Mental Meanderings - and I was just really touched by this. The main reason being that I don't always appear to be the nicest person in the world due to the snide, sarcastic barrier that I toss up around me. However, trust me, under this crusty exterior is a person who really strives to be nice. It's not always easy and certainly I'm not always nice but it's just really special for me to know that there are people out there who think I am. Now, Jenifer, before you leave a comment saying I've got everyone bamboozled here just remember - "perception is half the battle"!

For those curious where the Nice Matters Award originated, it was the idea of Genevieve at Bella-Enchanted. She states that this award is for "those bloggers who are nice people; good blog friends and those who inspire good feelings and inspiration.Also for those who are a positive influence on our blogging world." I am really honored that three people think I am deserving of this award and I thank you all. I am also supposed to pass this one to five other bloggers but considering my eyes are crossing as I type this and I've still got another whole part of this post to go, I'm going to have to defer that to another time!

The second part of this post is a meme that I was tagged with by The Curmudgeon himself from Second Effort who got tagged by the Empress Bee who had been tagged by Sandee of Comedy Plus who had been tagged by ... uhm, I don't know! Suffice it to say that the meme seems to have originated with Bucky in a blog called "The WVb." ... The what?

Anyhow, this is the Seven "P's" Meme and the idea is to take the seven "P" words that you are given and give details about yourself using those words. Sounds easy enough, right? Considering my eyes are rolling even further up in the back of my head, I'm pretty sure I'm going to be amused as to what I finally ended up posting when I read it tomorrow morning!

Without further ado then I give you the Seven P's Meme...
Now again I'm supposed to tag five people but I am too tired to even consider doing such a thing right now. Maybe tomorrow? Maybe you can just play if you feel like it? Maybe I need to go to bed??
Posted by Linda at 8/17/2007