When I first saw the theme for this week's Manic Monday Meme hosted by Morgen at It's a Blog Eat Blog World my thoughts immediately jumped to all of the negative connotations of the word "lie". False statements made with deliberate intent to deceive; intentional untruths; falsehoods ... you get the idea. Sometimes I don't know if we as human beings are better at lying to ourselves or to others but most times it isn't pretty and it sure isn't beautiful as the title of this post might lead you to believe.

After tossing about - and then tossing out - numerous topic ideas I finally decided that rather than go for the negative I was going to shoot for the positive and write about one of my favorite bands and their second album - "A Beautiful Lie". Besides, I haven't had the opportunity to talk about rock stars and "guyliner" for quite some time so I figured this was my chance! Before reading further, click on the play button on the video below this so you can listen to the single "A Beautiful Lie" while I expound a little more on 30 Seconds to Mars, Jared Leto, and - sigh - those eyes! By the by, this video was the best I could find over on YouTube as this particular song has yet to be released on video by the band and you know how those crazed fan-girls can get on these things so just listen and don't watch! Unless you really, really, really like men who probably wear eyeliner better than most women!


In August of 2005 30 Seconds to Mars released their second album which was recorded on four different continents in five different countries over a three-year period in order to accommodate the acting career of Jared Leto - front man, guitarist, and object of love for the girl who made the above video! The album differed from their first self-titled album both musically and lyrically with lyrics said to be "personal and less cerebral" while the music took on a more alternative rock approach.

The album's title track, as well as three other songs, were composed in Cape Town, South Africa where the rest of the band had joined Leto in order to finish the album. It was while there that Leto conceived the album's current title and changed it from the previously planned The Battle of One. Which was good for me or I'd be writing about something else for this post! 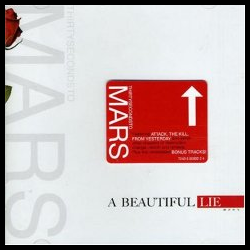 Re-released in a deluxe edition in November of 2006 with several bonus tracks, the album has produced four singles to date: "Attack", "The Kill", "From Yesterday", and "A Beautiful Lie". Both "The Kill" and "From Yesterday" entered the top ten on the U.S. Modern Rock Chart and helped send the album to Platinum status by shipping over 1 million copies.

One of my favorite songs on the album, "The Kill" has been described by Jared Leto as "... really about a relationship with yourself. It's about confronting your fear and confronting the truth about who you are." The video is set in a hotel, based loosely on the 1980 film The Shining , and contains several subliminal messages, most notably at 2:58, 3:51, and 3:58. The video was selected as the second best video of 2006 falling short of the win to "Savin' Me" by one of my other favorite bands, Nickelback. I admit that I like this video not only for the song itself but also because Jared Leto looks pretty danged hot in a full formal tux along with those eyes of his. 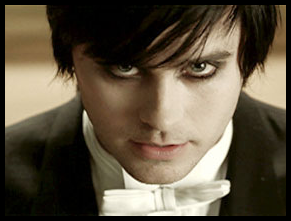 The first video I ever saw by 30 Seconds to Mars wasn't "The Kill" but "From Yesterday", the first American video to be shot in its entirety in the People's Republic of China. In typical 30 Seconds fashion the full version of this video follows in the footsteps of its predecessors and is over 13 minutes long. The success of the video helped launch the song to #1 on Billboard Magazine's Modern Rock Tracks chart and even eclipsed "The Kill" which was considered to be the band's breakthrough song.

At the end of the video for "From Yesterday", the opening notes of a "A Beautiful Lie" are played which led to much speculation that it would be the band's next release from the album. In May of this year it was officially announced on the 30 Seconds to Mars website that it was to be their next single but not before the band checked the preference of the "Mars Army" (not to be confused with Amanda's beloved "MCRmy" of My Chemical Romance!). While on their European tour in June, Leto told fans during an interview that the video for "A Beautiful Lie" should be finished within a month or so and no doubt it will be as good as their previous videos though we're still waiting to find that out for sure! In the meantime, we have videos made by dedicated fan-girls who would probably squee at octaves high enough to break glass were they ever to really meet Jared Leto up close and personal with those eyes of his! 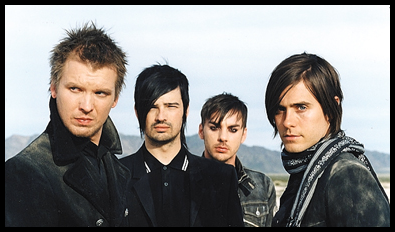 Now admit it folks, wasn't this better than writing about untruths, deceit, and falsehoods? It was, wasn't it? Right? Cone on, admit it, don't lie! Now go and have a beautiful Monday!