Manic Monday - Deal Me In! 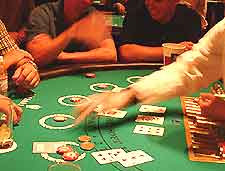 I've been a 911 dispatcher for so many years now that I think I have lost count but I've also worked a lot of other jobs in my many years. One of my very favorite part-time jobs was as a blackjack dealer at the Mohegan Sun Casino here in Connecticut.
I have always loved the game of blackjack and enjoyed playing the few times I was in Vegas or at Lake Tahoe when I could get a low limit table. As much as I liked playing, I didn't like losing money which is inevitable unless you're a professional - which I'm not. Rather than lose my own money, I decided to try giving dealing a hand and was able to get into a class at the Sun back in the summer of 2001.

For eight weeks I went to Dealer School every Saturday and Sunday for eight hours. At School I learned card handling, chip handling, math in relation to pay-outs, customer service, security - a lot more than what one might think. At the end of School you had to pass an audition before you could actually get out on the floor and become a real Dealer.

Because one of my brothers works surveillance at the Sun, I could only work the 5:00 a.m. to 1:00 p.m. shift and let me tell you, there were times when I couldn't for the life of me figure out how I made it out onto the floor for 4:50 a.m. when I had worked my full-time job at the PD until 10:30 the night before. Regular readers might remember how much I hate mornings, right? Yep, I really hated mornings then! But I wanted to deal and that was the only time I could do it so I would haul myself out of bed and hit the casino floor and hope for a busy table.

One of the biggest downsides to dealing is when there is no one playing at your table because - boy o' boy - can the time crawl by! You try standing behind a table for 60 minutes at a stretch with your hands in visible site at all times and see what fun it isn't! I always knew I was in for a great day when I would report to my assigned pit for the day and find out that I was doing a relief rotation. A relief dealer has three tables assigned to them and you relieve the dealer at each table for a twenty minute break every hour. I'd do three different tables in an hour, take a 20 minute break myself, and then start the string all over again. People either loved me or hated me as a relief dealer as I was either coming back to the table to get rid of a tough dealer for 20 minutes or I was there to wreak havoc on the people at the table until the "nice" dealer came back. I never took it personally because it wasn't - it was just the nature of the game.

I loved the interaction with people who would sit down at my table to play, especially if it was a group of friends out to have a good time. There were times when I had some real miserable SOBs at the table - people that I knew had a problem and were gambling away the rent money - but I always tried to be personable and polite as they were customers and they were supposed to be there to have a good time. At least that was my hope!

I gave away a lot of money and I took away a lot of money over the course of the 8 months that I was able to keep up that brutal schedule. I was always happiest when people won, and not just because that meant they were tipping the dealer, but because it made me happy to see someone take a little of the casino's money out the door with them. I knew how happy I felt when I would play in the past and occasionally win and I wanted people to take home that same feeling.

Anyhow, it's been a long time since I've stood on the dealer's side of the table or even sat on the player's side but I still like the game. It's the thrill of victory and the agony of defeat all at the turn of a card! 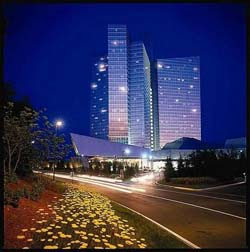 Mohegan Sun Casino
Oh, I also dealt a few other novelty games including Caribbean Stud Poker but there were very rarely any studs at the table and I was certainly no where near the Caribbean! Sort of seemed like false advertising but it was still kind of fun! For more fun, head over to Mo's and see what else he's dealt out for Manic Monday fun!