I already wrote about this particular topic once way back on November 14th of last year (see post here) but I think it bears repeating because there are still many, many, many people out there who apparently have not gotten the message, refused to hear it the first time, or suffer from a worse memory than mine. If, by repeating myself, this post can save just one 911 dispatcher the frustration that I felt today then it was worth it.

For those who don't know this - 911 is not - I repeat is not - a magic number whereby you dial it and help immediately and miraculously lands on your doorstep without you having had to tell the human being (human being - not psychic!) on the other end exactly what your particular emergency is. It does not work that way - we have to ask questions.

The reason I bring this up - again - today is that I had one of those highly annoying 911 calls that all of us who are insane enough to work in our chosen field get from time to time where the person calling felt that by screaming at me and being rude, he was going to get an ambulance to respond quicker. Add on the fact that I got this call at the very end of my shift while trying to give turn-over to the guy who was taking over for me and that explains why I brought the frustration home with me rather than leave it in the dispatch center where it belongs.

The call came from a local pharmacy store and was for a person who was having active seizures but rather than understand the fact that my partner was perfectly capable of starting the ambulance while I asked a few more crucial questions and maybe - just maybe - give some instructions to the caller that could help the patient before we got there, the original caller handed the phone over to the store manager who proceeded to scream at me about not asking stupid questions and just get the ambulance there NOW!

I should be used to it by now - I should be immune to people screaming and hollering at me on the phone - but I'm not. Why on earth do people think that being rude and yelling while treating me like a complete and total idiot is going to get them something quicker? I fully understand that watching someone have a seizure can be scary as the patient will tend to pass out and stop breathing (perfectly normal in the course of a seizure) but if a caller won't calm down enough for me to tell them that or what to do once the seizure stops, it makes my job that much more frustrating as well as making the caller helpless instead of helpful.

I am a trained professional. I can give vital life-saving information. I can pass on information to the ambulance crew that is responding that might make a difference in the outcome for the patient. But I can't do it if I'm being yelled at by the person on the other end of the phone.

Please, if you ever find yourself in a position where you have to call 911, try to remember that we are there to help and that we can help if you give us a chance. The ambulance or fire department or police officer is going to take awhile to get to where you are (the technology to "beam" people over yet does not exist) but in the meantime you as the person on the scene can help either your loved one, the stranger that you stopped to assist, or even yourself if you'll just give the 911 operator on the other end of the phone the chance to do so.

I'm sure that there is not a single 911 operator out there who wouldn't be thankful for the opportunity to do his or her job without being yelled at. I know I would be.

Whatever you're doing tomorrow night between 7:00-8:00 p.m. EST, don't forget to tune into The Mo Show at it's new time spot on blog talk radio.

This week's topic will be "Classic Sitcoms" and it's sure to be another fun-filled hour while the magnificnet Morgen, host of the show, presides over such burning questions as:

Did you ever wonder why the Professor could make a radio out of a coconut but couldn't fix a hole in The Minnow?

Ever want Sister Bertrille to toss the habit and take a flying leap into Carlos Ramirez' arms?

Do you still say "Whachoo talkin' 'bout, Willis?"
It's sure to be a great hour and I would be willing to bet the farm that you'll be able to hear Mo's infectious laugh a time or two as there will be no canned laughter for our man Morgen!

Be there or be prepared to have some 'splaining to do! 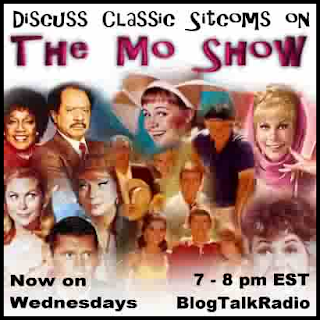 This banner created by the talented Janna at http://jannagraphics.blogspot.com
Posted by Linda at 8/07/2007