"Won't you take me to Funky-town ..." those lyrics are sure to be stuck in my head all weekend as this week's theme for the Saturday Photo Scavenger Hunt, hosted by the gracious TN Chick, is funky.

When I first saw that I drew a complete and total blank as to what might be available in my photo collection that qualified as funky. Granted, I was a teenager in the late 70's and funky was everywhere but I was also pretty conservative and bypassed the whole funky disco-era as much as possible. I can honestly say I never set foot in a single disco though I did enjoy a lot of the music (yeah, yeah, I heard that!)

Leave it to Amanda to come up with the perfect idea for a funky picture. She decided just yesterday that her black boots were too boring the way they were and decorated them with some puffy paint that we had left over from another project. Add those newly decorated boots to a pair of purple fishnet tights and her baggy white shorts and what you get is ... 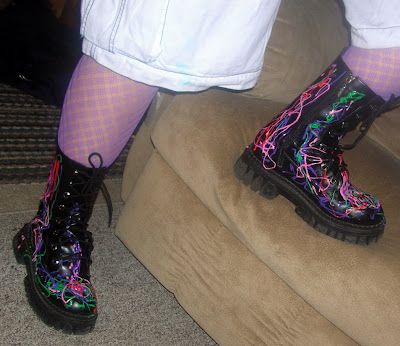