Sending a Prayer North to Boston

********************
I know from past experience that those in the Blogosphere are very good at sending warm wishes, good thoughts, words of encouragement and support, and whatever sort of comfort or aid is needed for those in time of need so I'm going to ask you, once again, to send some of those good thoughts and prayers on to those who need it.
The Boston Fire Department suffered a major loss last night when two of their finest died in the line of duty while battling a restaurant kitchen fire in the Roxbury section of the city. Killed in the blaze were Paul Cahill, 55, of Scituate, and Warren Payne, 53, of Canton. Both men served on Engine 30, Ladder 25, which was the first unit to respond to the fire. Payne, a 19-year veteran, leaves behind a wife and two children. Cahill joined the department in 1993. He is survived by a wife and three children.

In addition to the two deaths, nine other firefighters and one paramedic were injured during the blaze and have since been released from area hospitals. Another firefighter is still being treated for smoke inhalation but could be released today.

These kinds of tragedies seem to be happening way too often lately along with an increased number of senseless line of duty deaths in the police community. Statistics that were released last month showed that 101 local and federal law enforcement officers had died on duty in the first half of 2007, 31 more than had died at the same time last year. Even more disturbing is the fact that it was the first time in three decades that the toll had reached more than 100.

All of these men and women know that they go into a dangerous career field when they choose a career in either law enforcement or firefighting but that doesn't mean we shouldn't do all we can to protect them and ensure that they are able to go home to their families at the end of their shifts.

Please join me in sending up a prayer for the families of Firefighters Payne and Cahill during this time of tragic loss. Also, please send out thoughts of support and encouragement to the other firefighters injured in the Boston blaze. May God bless and protect them all. 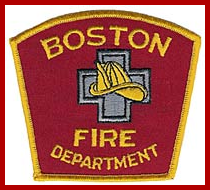