Sometimes You Want to Go ...

********************
I'm not participating in this week's Photo Hunt as I won't be around to visit other participants blogs due to the fact that I'm actually going to go somewhere and do something for a change. Alert the media and stop the presses!! Linda is putting down the laptop, getting up off of the couch, and actually doing something on her day off! Will miracles never cease??

I'm not sure how I'm going to survive without the Internet for what promises to be an extended period of time but I'm heading to Boston for the day with no particular agenda in mind except for two small things that should be easily accomplished.

First and foremost, I want "to go where everybody knows" my name: 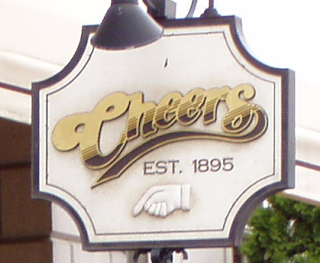 I'm pretty certain that no one is going to know my name as I have no intentions of wearing a tag that says "Hello! My name is Linda" but this is just one of those stupid touristy things that people just have to do from time to time and I plan on being a stupid tourist tomorrow sans the belt bag. Besides, I figure it will be good for a blog entry at some point!

After visiting the home of one of my favorite sitcoms and perhaps doing my best Cliff Clavin impression and spouting bits and pieces of useles knowledge that is oftentimes wrong such as "It's a little known fact that the tan became popular in what is known as the Bronze Age", I then want to go in pursuit of the one other thing on my list and that is a trip to the North End and Little Italy where I plan on throwing my low-carb diet to the wind for a brief time and scarfing down a mouth-watering, totally decadent cannoli! I will then spend the next several hours jogging around Boston Common, the oldest public park in the country, in order to burn off said cannoli! 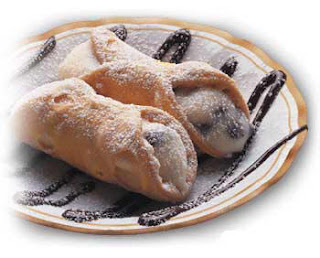 Beyond that, I have no idea what we're going to do and that's half the fun of this trip. Perhaps we'll take in some historic attractions like the Old North Church or Paul Revere's House; perhaps stop by the Museum of Fine Arts; perhaps check out the Fisherman's Feast of the Madonna Del Soccorso which is Boston's oldest continuous Italian Festival celebrating its 97th anniversary year; or perhaps just walk around Newbury Street and Quincy Market for awhile.

With a city like Boston the possibilities are endless and the forecasters are predicting a beautiful day so I'm looking forward to the trip even though I'm sure I'll really be dragging come Sunday morning when I have to schlep myself in for another 16-hour shift at the dispatch console. Oh well, I guess that's the price you pay for getting off the couch and enjoying life once in awhile!

Everyone have a great Saturday and try not to miss me too much! I'll think of you all fondly while I'm munching on that cannoli and feeling only slightly guilty. Gee, now that I think of it the Photo Hunt theme was two this week so maybe I should have two and take a delayed picture?? Hmmmm ...
Posted by Linda at 8/18/2007

Email ThisBlogThis!Share to TwitterShare to FacebookShare to Pinterest
Labels: Boston, day off