We're going to have a Revolution

I have a sneaky feeling that I'm going to need a certain period of recovery next week as, for the very first time in my life, I'll be spending almost an entire day at a rock concert. Heaven forbid I have been smart enough to do this sort of thing when I was teenager - oh no, I have to wait until just about my 49th birthday to attempt the sort of feat that leaves teenagers worn out for days! I shudder to think what my dispatching abilities are going to be like come Monday morning but I am taking my double-shift off from work on Sunday so that Amanda and I can go to the Dodge Music Center in Hartford for the Projekt Revolution 2007 tour. For those not familiar with the ins and outs of rock concerts, Projekt Revolution is an annual concert tour headlined by Linkin Park, a rock band formed by three high school friends from California that has sold more than forty million albums and won two Grammys. Projekt Revolution is dedicated to featuring revolutionary, cutting-edge talent with each band invited personally by Linkin Park to perform. This year the tour totals eleven bands with two of them being Amanda's all-time favorites - My Chemical Romance and Mindless Self Indulgence. Needless to say, Amanda has been talking about this concert ever since we went to go see MCR at the DCU Center in Worcester back in May.

The road to the concert has taken some rather interesting twists and turns along the way, especially when I found out that one of the EMTs I work with at American Ambulance is none other than the sister of Lyn-Z, bassist for Mindless Self Indulgence. The day I told Amanda about that fact I thought she was going to hyperventilate or something and she was beyond thrilled to meet Lyn-Z's sister Amy at the annual 4th of July fireworks show here in Norwich. At that time, Amy told Amanda that she would be happy to take her to a concert sometime and would be able to get Amanda backstage to meet Jimmy, Steve, Lyn-Z, and Kitty - the four amazing musicians who make up Mindless Self Indulgence. I'm sure I don't have to tell you how incredibly excited about that Amanda was and still is. What 15-year old wouldn't be psyched at the possibility of meeting one of her favorite bands? Exactly ... 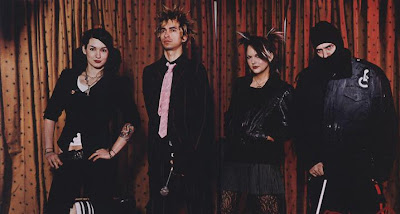 Lyn-Z, Jimmy, Kitty, Steve are Mindless Self Indulgence
With MSI performing as the headlining band on the Revolution stage for Projekt Revolution Amanda spent the entire summer really hoping that she would have the opportunity to meet Lyn-Z at their show this Sunday. I spoke to Amy about it a couple times at work and tried to remain hopefully optimistic while also cautioning Amanda that there was always the possibility of it not happening for one reason or another.

All speculation ended yesterday when I was walking into work and met up with Amy in the ambulance bay. She said that she had finally been able to talk to Lyn-Z and that there was no problem getting Amanda in to the concert and getting her a VIP backstage pass but that she wasn't able to take her up as she already had a car full. A short, very short!, discussion ensued as to whether I should try to take the day off to take Amanda myself whereby I decided that if I told Amanda she had the chance to go to the concert but I opted to work instead I would have a really, really depressed teenager on my hands and that wouldn't be good. Plus she had been looking forward to this concert all summer long. I made a command decision at that point to do my darnedest to get the day off on very short notice, told Amy to put both of our names on the list, and went up to dispatch to beg one of my co-workers to take my Sunday evening shift in exchange for his Saturday evening shift.

Even with the evening shift covered that left Jen by herself for days but she assured me that she could handle it on her own as she has done so in the past many times over. Once Matt, my supervisor, came in I explained the situation to him and he told me that getting the time off would be no problem. Gotta love the fact that the man not only understands the importance of a rock concert but knows how much it means to Amanda to have the chance to meet a favorite band! When I called Amanda at home to tell her the news, I'm pretty sure I could have still heard the squee'ing with my cell phone ten feet across the room! Excited might not begin to describe how she feels right now.

So, come Sunday I will be following Amy and her entourage up to the Dodge Music Center where we will give our names to the folks at the gate, get our VIP passes, and have what I hope is an excellent time doing something that most teenagers only get to dream about. I'm rather psyched myself that my first time at an all-day concert event includes the opportunity to meet members of some of the bands that are performing while watching my daughter's head spin in awe. Ah, who am I kidding? I'm sure my head is going to be doing some of the same spinning as I just love Linkin Park's music and it's another chance to see My Chem in concert, too. Maybe I'll even get the chance to meet Gerard Way! The one downside is that there are NO cameras allowed at the concert at all so you guys are just going to have to take my word for it that we were there and that we met some totally cool people!