Bearing the Shorter Days of Winter

********************
One of the biggest drawbacks to summer finally coming to an end and fall waiting in the wings to let loose with its glorious colors, smells, and tastes is that we are losing precious minutes of daylight on a regular basis. Not being one to be outside all that much, especially in the fall when my major allergy nemesis {{cue ominous music}} the dreaded ragweed is in full bloom, I don't mind it being dark earlier in the evenings too much but if there is one thing I hate, it's having to go to work in the mornings when it's still dark outside!

I'm not a morning person anyway as many previous posts will attest and, no matter what I do, I just can't get my mind to wrap around the fact that I need to get out of bed in the mornings regardless of whether it's light or dark outside. Nope - if it's dark out then I am wholly convinced that bed is the place to be. If the sun isn't up, why on earth should I be up? Doesn't seem quite fair, now does it? I swear, I would have made the world's worst farmer - ever!

Maybe it's because we're mammals that, as winter approaches with its shorter days and longer nights, I have an increased desire to take up hibernation and simply sleep it out until that pesky little Punxsutawney Phil pokes his head out of his celebrated ground hog's hole and declares spring to be close by. 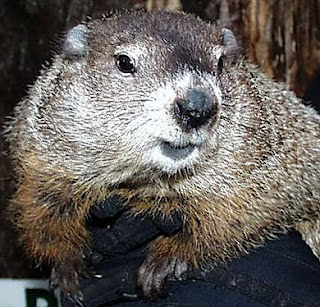 Now that I think about it, hibernating away the winter might not be a bad idea! Imagine the money that could be saved on heating costs, electric bills for both indoor and outdoor lighting, grocery bills, money spent on entertainment in order to not go stir crazy for the entire winter, doctor's bills for when I throw my back out shoveling, and the cost of celebrating the holidays. Why, if I slept right through it, I wouldn't have to worry about writing out and mailing Christmas cards, eating way too many Christmas cookies, or trying to find the perfect gift! Rather than get caught-up in the Christmas crush I could simply have visions of sugarplums dancing through my head throughout my winter hibernation. 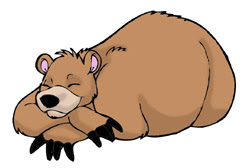 After a long winter's nap I could wake up relaxed, refreshed, and ready to start the year with a whole new attitude and probably a sizable weight loss as I certainly wouldn't be doing any of that "I can't leave the house because the weather is awful and I'm bored so therefore I'm going to graze" eating! Granted, I might miss an episode of two of Boston Legal but that's what re-runs are for!

The biggest drawback, though, would be that unless everybody else hibernated, too I shudder to think how many unread posts I'd have in my Google Reader! Just having to get caught up might be more than I could bear!
Posted by Linda at 9/14/2007