A Date to Look Forward To 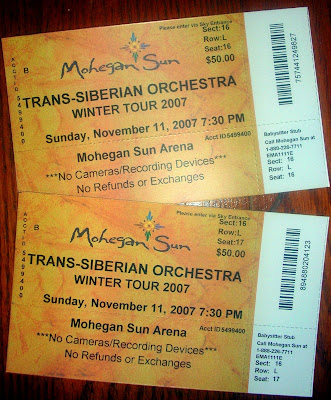 Behold two tickets to the Trans-Siberian Orchestra Winter Tour 2007 that I managed to get yesterday - yay!

Last year Amanda and I attended a TSO concert at The DCU Center in Worcester, Massachusetts on December 27th (you can read about it here if you'd like) and it was absolutely fantastic so we definitely wanted to attend another somewhere in the area this year. I signed up for email updates with the band and two weeks ago I received notification that ticket sales were starting on the 6th of September for their winter concert dates. Knowing how fast tickets to these shows go, especially when they're at the Mohegan Sun Casino which is just down the road from me, I wasn't sure whether I was going to be able to get them or not as September 6th was nowhere close to payday and finances were, as per usual, tight.

As I had gotten my recent annual evaluation at work and received a small raise retro-active to June, I knew there was going to be a little extra money in this paycheck so hoped to use it to get tickets as long as there were still some left for one of the two performances at The Sun. After checking Ticketmaster and seeing that they still had them available on-line, I talked Amanda into going down to the casino with me with the lure of dinner as an incentive. Luckily the box office had even better tickets than what were offered on-line and by buying them there I saved myself the exorbitant handling charge that Ticketmaster has. Matter of fact, I used that exorbitant charge to buy Amanda and I dinner at Johnny Rocket's!

An original Rocket burger for me, cheese fries to split, and chicken tenders for Amanda - yummy! And no, none of those are diet foods but every great once in awhile you need to treat yourself - am I right??
Posted by Linda at 9/14/2007