Happy Birthday to Jimmy & a Poll For My Readers

********************
Well, well, well ... come to find out that along with such blogging greats as Sandee from Comedy+, Callie Ann from Scrappin' with Life, Jen from Mommy 911, and Kai from The Buzz Queen there is another September birthday to celebrate that belongs to the one and only Little Jimmy Urine of Mindless Self Indulgence fame. I'm pretty sure I don't need to remind you who he is if you've been to my blog at all this week!

I wasn't aware of this great event until I received a text message from Amanda earlier in the day just prior to stepping into the dentist's office so it was too late to send the guy a card even if I had an address, which I don't! Of course it was unthinkable that Amanda let the 37th birthday of this alternative music icon, who really needs to eat a sandwich or two and buy some suspenders!, go by without rendering some sort of artwork to post on the Mindless Self Indulgence My Space page ... 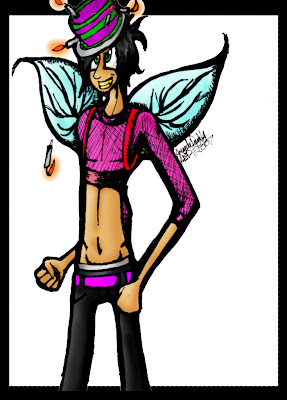 Happy Birthday to Jimmy!
Actually, that's a pretty good rendering of the man complete with fairy wings ... and, uhm, if you aren't familiar with MSI, which I'm going to guess a good majority of you aren't, please don't ask about the wings because I'm not quite sure myself just yet. Give me some time, though, and I'm sure I'll know more about the band then I ever wanted or needed to! Living with a teenager you sort of end up getting these things through osmosis!

Speaking of getting things (nice segue, eh?) ... I have been asking my somewhat talented daughter to do some artwork for me now for months as I have wanted to update my blog's appearance a bit and change the design. I asked my fantastic blog designer, Se7en of Blogs Gone Wild!, if he would be able to use Amanda's artwork to make the changes for me and he assured me that it would be quite doable. Problem is, I can't seem to motivate Amanda to produce said artwork.

Now, you would think that after my having taken her to the Projekt Revolution concert where she glomped me, after having gone out in the middle of night to procure the last Harry Potter book for her, after having opened up her Cafe Press shop for her that the kid would have come across with some artwork for her dear old Mom but apparently she "hasn't been inspired" to do it.
Obviously I am doing something wrong so I am now appealing to you, my readers, in the form of a poll which you will find below. Feel fee to vote as many times as you like, I haven't placed any restrictions on it, and let Amanda know what you would like to see done here. I've even give you a spot to write in your own answer if you don't like the two I've provided.

I had thought maybe it might be a nice birthday present but ... I doubt that's inspiring enough either so let's see how she responds to some blog pressure!

Polling closes Saturday at midnight!
Posted by Linda at 9/07/2007