*********************
Amanda and I went up to visit my good friend and favorite hair stylist Trisha the other evening in order to get something done with our hair. I can't exactly remember when we'd had our hair done last (do you think if I bought a stick of IBM memory and installed it in my brain I might remember things better??) but I know that mine was looking pretty bad and Amanda's ... well, let's just say that Amanda's was in desperate need of a cut.

I don't know where she got it from but that child has got the thickest hair I have ever seen and if she doesn't get it thinned on a regular basis it gets way out of control. Generally by the time Trisha is done thinning Amanda's hair, there's enough on the floor to make a good-sized throw pillow! My hair isn't thin, it's probably average, and her father's is virtually non-existent but Amanda - well, Amanda has hair!

One of the biggest drawbacks to having such thick hair, though, is that a lot of the styles she'd like to have aren't really possible. Not only does she have a thick mane of hair but it's got a natural wave to it also that drives her completely nuts most of the time and again makes some of the styles she'd like out of the question. It's enough to make a 15-year old cry!

Amanda's hair was a constant argument between her father and I, one thing of many, as he insisted that she keep it long "in according with God's wishes". I always told him that God wasn't the one who had to deal with it but that never mattered to him; he wanted it long and so she kept it long and hated it. When she came out to live with me two years ago one of the first things she wanted to do was cut her hair and so I took her to see Trisha. Since then she's had a lot of different cuts and several strange colors but at least now she has some say in what her hair looks like. My mother generally tends to look at it and shake her head in disbelief but I give Amanda a lot of credit for not only wanting to be a little different from everyone else but daring to be so. She's creative and artistic and I don't want to squash that in her like her father always seemed to do. I'm not sure if that makes me a pushover as a mother or not, I hope not.

When we left Trisha's this time I really liked Amanda's new hairstyle and she was quite happy with it also. She's going for a certain look that is going to take some time to achieve because it needs to grow out more in the back but her hair grows very quickly so that shouldn't take too long and in the meantime, I can actually see her eyes and her face! Trisha and I both tell her she's got a very pretty face but just like when I tell her that her artwork is good, she doesn't believe me. Gee, I hope we run into Gerard Way again sometime so he can tell her it looks good and then maybe she'll believe it! 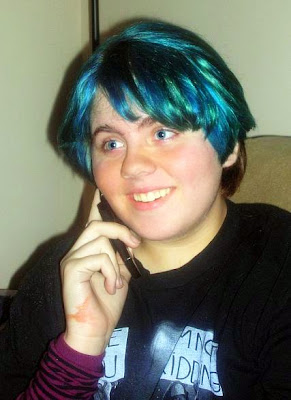