********************
This week's Manic Monday word is "kit" and after debating whether I should pack up my troubles in my old kit-pack or explore the West with Kit Carson (which I felt fairly confident that Jamie was going to do!), I finally decided to spell the word just a little differently and take you on a trip to Tucson, Arizona.

Back in the mid-1960's, my Dad was stationed at Davis-Monthan Air Force Base in Tucson. This was back in the days when people still took Sunday drives and I can remember many times we'd all pile into the car and take off to destinations unknown, at least they were to us kids as we never knew where we were going until we got there! My parents were great at keeping secrets and despite lots of guessing, the four of us in the back seat generally had no idea where we would end up.

One of those impromptu road-trips brought us to the Kitt Peak National Observatory which has the world’s largest collection of optical telescopes. Located 56 miles southwest of Tucson, the observatory sits high above the Arizona-Sonoran Desert on the Tohono O'odham Nation and is home to twenty-four optical and two radio telescopes representing eight astronomical research institutions. 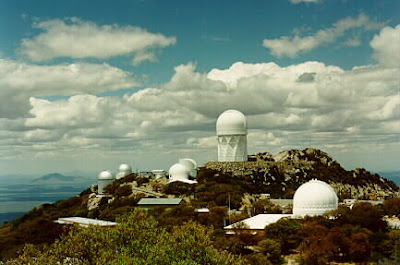 Perched atop a 6,880 ft peak of the Quinlan Mountains, Kitt Peak National Observatory (KPNO) lays underneath some of the finest night skies in the world. Founded in 1958, KPNO operates three major nighttime telescopes. The other 19 optical telescopes and two radio telescopes are operated by a consortium of tenant facilities including the Calypso Observatory, the only private telescope on the mountain. 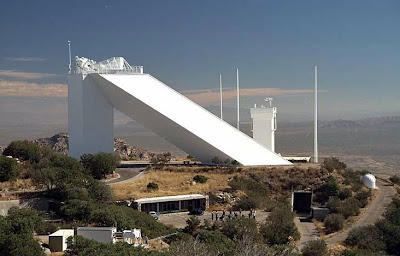 The McMath-Pierce Solar Telescope, named after astronomers Dr. Robert McMath and Dr. Keith Pierce, is the largest telescope of its kind in the world. Built in 1962 it contains a three-mirror heliostat at the top of its main tower which collects the sun's light and focuses it down a long shaft that continues underground where the telescope's prime focus is located. The McMath-Pierce is used to study the structure of sunspots, as well as sunspot spectra, but unlike other solar telescopes, the McMath-Pierce is sensitive enough to observe bright stars in the night sky, too. As a second-grader, this was pretty darned cool to tour as its 100-foot tower seems even bigger to a 4-foot child. 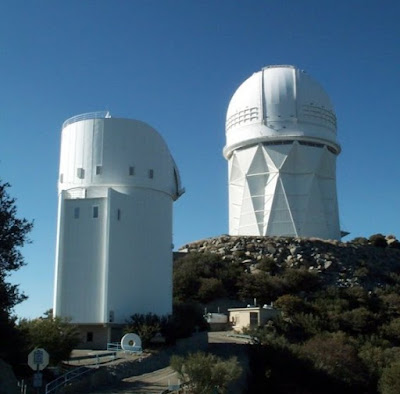 Other telescopes at KPNO include the 18-story 4-meter Mayall which can be seen from over 50 miles away and the Steward Observatory's 0.9-meter Spacewatch telescope, on the left. If you're interested in seeing more of the Kitt Peak National Observatory, check out the KPNO webcams which are located on the catwalk of the 2.1 meter telescope and the 4-meter telescope. Should you ever find yourself near Tucson, I highly recommend a visit in person!