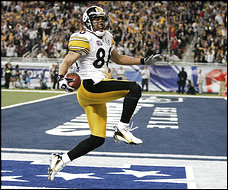 It is with a great deal of pleasure and delight, as well as extreme humility and not a smidgen of hubris, that I can announce – I WON! I WON! I WON! And for women everywhere let me just say, it’s about dang time!!!

What exactly is it that has me doing the “end zone happy dance”? What could possibly inspire me to set the laptop aside, jump up off the couch, and pump my fist in the air triumphantly? Well … glad you asked! For the first time in a long time, I managed to win first place in Mimi Lenox’s Saturday Comeback Challenge at Dating Profiles of the Day! WOOHOO!!!

Even though the contest is based on poorly written personal ads by men, it seems that every week the contest is won by a man. I have yet to figure this out as it just strikes me as funny – in the odd sort of use of the word – that men have snappier comebacks to other men than women do. The only reason I can think of for this phenomena is that men are so used to hearing women make snide comments when they themselves make a stupid statement that it has become second nature for them to be able to answer their own stupid statement with the exact snarky comeback that a woman would make. Does that make sense to anyone else besides me?

To put it another way – when men get shot down enough, they probably already know most of the comebacks they’re going to get shot down with. It’s sort of like when you’re paper training a puppy; after he has been chastised enough times for peeing on the floor, he catches on that if he pees on the newspaper laid out for him or, better yet, scratches at the door to go outside instead that he gets rewarded rather than scolded. Hmm, in rereading that, maybe that doesn’t make as much sense as I thought it did but I went to all the trouble of typing it so I’m going to leave it there.

This week’s Comeback Challenge also showed a female taking over the third place spot in the form of Katherine of Wading Through My Stream of Consciousness (and she didn't even get bleeped this week either!) while the ever witty and very snide Bud Weiser of WTIT The Tape Radio Blog claimed the second place spot. Even with Mr. Weiser sandwiched between us and putting up a valiant fight, it was the week for girls to rule! Oooo-rah!!

If you’d like to play along, Mimi posts the questions on Saturday and you have until midnight on Monday to email them into her. She judges the entries using a new system, so as not to accidentally play favorites, and announces the winners on Tuesday at Dating Profile of the Day. If you win you get a spiffy badge like the one I have below to post on your sidebar to tell the world that you have what it takes to be the snarkiest on the block. Just make sure you mark on your email really, really well that what you're sending is the entry answers or they might accidentally get deleted, right, Mims?

So what are you waiting for? Come on and play – you know you want to!