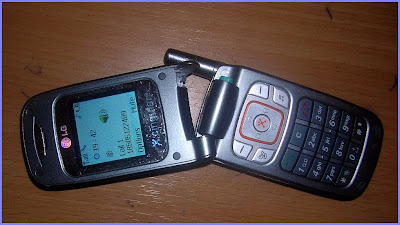 This week's Photo Hunt (hosted by TNChick) theme is plastic and initially I was pretty flummoxed on what to use for a picture. I was pretty sure there weren't any pictures of plastic in my files and I couldn't think of much around the house that was worth taking a picture of.

Then it dawned on me that perhaps I could use the picture of Amanda's broken cell phone that she had taken a couple of weeks ago because they part that was broken was made of plastic. Perfect!

How - you might ask - did her phone end up in this sorry state of disrepair? Well, let's put it this way ... when you glomp your mother at a concert and land on your phone in addition to your mother in a pile on the hard ground, this is what happens!

Happy Photo Hunting and have a fantastic weekend!

Note: For those NOT familiar with the term, Glomping is a form of greeting used mainly among Anime fans. A typical "glomp" involves bear hugging someone, tackling them, and latching on tightly, though not enough to intentionally hurt the recipient. Perhaps I should add that it's not a good idea to have your cell phone in your pocket when you land on top of the person you have glomped! This phone eventually broke in half completely, despite the best efforts of duct tape, and Amanda now has a new phone that she likes much, much better. I, on the other hand, am still stuck with my old LG phone as we used my upgrade to get her a new one!