A Week of Lunacy Minus the Moon! 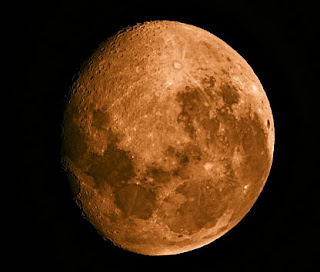 Thank God it's my Friday and I have wrapped up another work week! This one has been a bit of a bear and I am more than thankful that it's over. To say that it was busy would be a major understatement but I can't for the life of me figure out why as we're not even close to a full moon (the next one isn't until the 26th).

Lest you think I'm just being superstitious about the the whole full moon thing please trust me - I'm not. Talk to the people who work in police departments, hospital emergency rooms, drug rehabs, psychiatric facilities, or any dispatcher anywhere and they will all tell you the same thing - it gets crazy during a full moon!

I've read several articles lately that try to debunk this particular "myth", as they like to refer to it, and chalk the erroneous belief up to five factors - media effects, folklore & tradition, misconceptions, cognitive biases, and communal reinforcement. Well, I don't care how scientific they want to be about it or what they attribute the lunacy to, I'm here to tell you it's true and no amount of scientific studies is going to convince me otherwise! People just get crazy during a full moon!

Well, no matter how you look at it and whether you believe it or not (do you??), all I can say is that as busy as this week was with one emergency after another (and off-the-wall ones at that), I can only imagine what it's going to be like in two more weeks when the moon is honest and truly full. I'm thinking hiding under a rock then might be a good idea!

Hmm, now that I think about it, I wonder if I could talk the Upper Management at work into giving us a little extra "Lunar Pay" for the times when the moon is full and it gets even more hectic than usual? What are the chances they'd tell me to "go bark at the moon" if I suggested it??
Posted by Linda at 9/13/2007