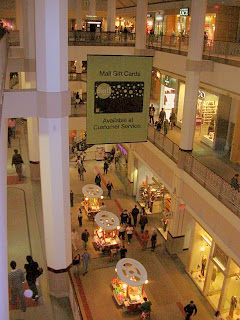 I think I may have mentioned this in the past but allow me to reiterate it one more time just so we are all clear on this particular subject - I totally despise shopping malls. I do not enjoy going to a place that is a veritable mass of merchants out to relieve me of my money with wares that I neither need or want. However my darling daughter, being the teenager that she is, thinks that the mall is the mecca of society - a place to go and spend lots of time in even though there are only about three or four stores that she will set foot in. And that includes a mall that has over 170 shops! A mall that has three very high stories, carpeted floors, and over 170 shops! A mall that took us over an hour in the rain and wind to drive to with a parking garage almost bigger than the State it's in and over 170 shops! A mall that will make you feel somewhat dizzy if you stand too close to the rail on the third floor and take a picture looking straight down at the kiosks below and has over 170 shops! 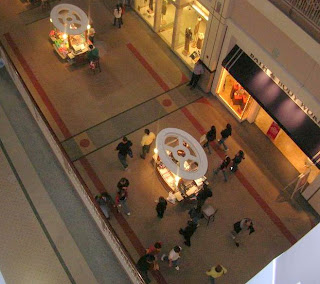 So after all that, you might ask how the Retail Therapy to Get Over Not Being Able to Go to the Canceled My Chemical Romance Concert went and I would have to say that it went okay for the most part but it took a trip to more than just one mall to affect a total cure. After all, missing a concert that you had your heart set on for almost a month requires some heavy-duty shopping - at least that seems to be the case for Amanda!

We got to the Providence Place Mall around 3:30 in the afternoon and, after finding our way through the labyrinth of a parking garage, we made our way through the Macy's entrance to access the mall. Both Amanda and Cate cringed while having to walk through a store that sold "prep" clothes and appealed only to the masses who were merely brainwashed conformists but they survived the short walk through what I thought were a lot of cute looking clothes. Sadly, my daughter has no interest in 'cute looking clothes' and was chomping at the bit to get to Hot Topic where they sell things goth and Emo and non-conformist. It's a store that not too many adults frequent but boy-oh-boy do kids like Amanda and Cate just love it!

The one at the Providence Place Mall was surprisingly small for such a large mall and it was pretty well packed with kids who looked like they were more than ready for Halloween. After looking through their displays and not seeing anything that jumped out and screamed "Buy me! Buy me!" we went next door to a very large Newberry Comics store. There were more than several things in that particular store that screamed "Buy me! Buy me!" and Amanda walked out with two hard-to-find Mindless Self Indulgence CDs and a pair skeleton gloves. Don't ask! 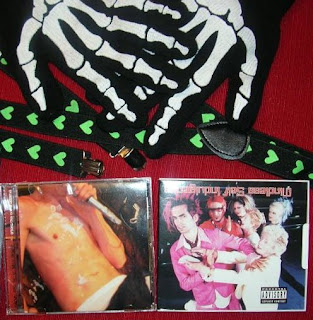 Gloves, suspenders, and two CDs
From there we went to Dave & Buster's for a late lunch so that the girls could play some arcade games while we adults sat and relaxed for a bit and talked about the stress and frustration that Amy is experiencing with her whole house-buying experience. In talking to her I am reminded why I will probably never be, or even attempt to be. a homeowner. The whole process of buying a home does not sound in the least bit like fun!

After lunch we stopped in at Claire's where Amanda got a pair of green-heart decorated suspenders and then the girls popped into Spencer's where nothing appealed to them. At that point we had hit pretty much the only stores in the mall that the girls had any desire to go to and we decided to get the heck out of Dodge as it was pretty crowded and there really wasn't anything else to do as far as we could tell. It seemed to take longer to get out of the garage then it did to walk the mall but we eventually made our way out onto the turnpike and headed back towards Connecticut in a rainstorm that provided absolutely no visibility.

Amanda wasn't feeling particularly thrilled with the whole shopping experience as she had expected more from a mall the size of the one we had just left so I suggested that perhaps we could stop in at the mall closest to home and maybe the Hot Topic there would have something that she liked. At the one in Providence they had jackets that can best be referred to as the type that were worn by the members of My Chemical Romance on their Black Parade tour but they only had smaller sizes and Amanda was disappointed that they didn't have one in her size.

Thankfully it had stopped raining by the time we got back into Connecticut and I was actually able to see the road in front of me! When we got to the Crystal Mall the girls happily piled out of the car and into Hot Topic where Amanda was able to find the jacket she liked in her size. I told her that if I got her the jacket that was it - Retail Therapy would be complete at that point - and she was happy with that. 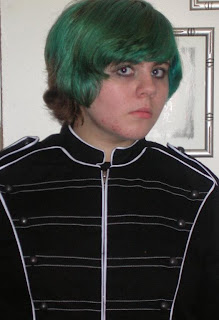 She really is happy despite the serious look!

After walking through a Halloween shop and trying on silly glasses for awhile we finally headed home with a very large moon hanging above and illuminating the way. I still don't have anything for a Halloween costume for myself but I guess we're going to try to hit a few thrift shops today and see what I can find there. Truth be told I've had enough shopping for the entirety of the year but as long as we don't go to any more malls I should be able to handle it. Hopefully! Besides, it beats working a 16-hour shift on what may be the first day of sunshine we've had in over a week!
Posted by Linda at 10/28/2007