********************
This has been one very busy weekend and it isn't over yet! As regular readers know, this was the weekend when Morgen from It's a Blog Eat Blog World came out to Connecticut from Michigan for a much-needed vacation via Amtrak. After a wonderful 10-hour layover on Thursday in Chicago, where he took a cab to Navy Pier and spent some time at an internet cafe and the Shedd Aquarium, Mo climbed back on the train and arrived in Springfield, Massachusetts on Friday night where he was met by myself and Mags of Miss Maggie Moo Talks 2 You.

After hugs at the train station, we went back to Mags' house where she had planned a wonderful array of appetizers and a marvelous crème Brule dessert that was out of this world. Mags' has a special recipe for an artichoke dip that is out of this world and I'm sure I ate more of it than I should have but it was just so good it was hard to stop eating!

The rest of the night was spent talking about all sorts of assorted things before we all finally retired for the night with plans to get going around 10:00 a.m. the next morning. Well, that didn't exactly happen! After a fantastic breakfast of homemade lemon cake and shirred eggs (a first for me and really delicious!), we finally got out the door around 11:00 to head south to Essex and the part of Connecticut where Mags' grew up. Unfortunately the weather was far from fall-like so it was a bit warmer than we would have liked but at least it wasn't raining. Of course, setting a new record high of 89 degrees was not exactly in our plans!

After walking around Essex a little bit (who supports Breast Cancer Awareness as indicated by the following picture!) - 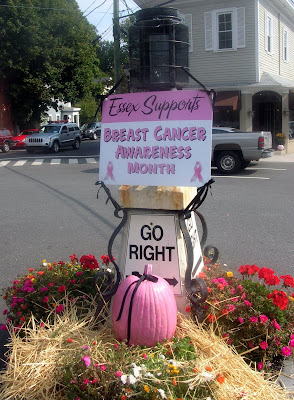 we drove around and got to see where Mags' spent much of her youth before taking the second-oldest continuously operating ferry across the Connecticut River to Gillette Castle State Park. 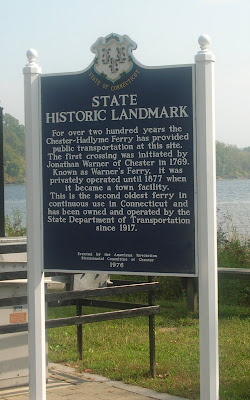 Gillette Castle was built by William Gillette, a prominent, though rather eccentric, actor and playwright of his time, on the tallest of the hills known as the Seven Sisters which run along the bank of the Connecticut River. The castle represents a German castle and was named "the Seventh Sister" by Gillette. It was completed in 1919 at a cost of approximately $1 million and was constructed of tons of fieldstone gathered from local fields and transported to the mountaintop via an aerial tram. 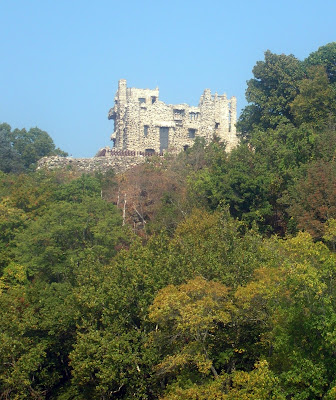 When Gillette died in 1937 it was stated in his will that the medieval castle he'd built "not fall to some blithering saphead who has no conception of where he is or with what surrounded". Due to the fact that none of his surviving family could afford the upkeep on such a grand house, it was bought by the State of Connecticut in 1943 for a mere $30,000 complete with all of the land (122 acres) and household goods, many of which are now on display throughout the house. It's been a State park ever since and no doubt thousands of us have toured it.

Even though the tour of the house itself was quite interesting, the main thing that Mo, Mags, and myself took away from it was the manner in which one of the tour guides spoke. His voice seemed to rise just about every sixth word or so and echoed throughout the entirety of the house despite the raffia matting that covered all of the walls as Gillette's way of soundproofing the stone. As we walked through the rooms on the second floor we'd crack up laughing every time the tour guide downstairs would say something like "On a train trip back from NEW YORK, Gillette's wife was suddenly taken ill and DIED." Granted, not a funny statement overall but the way it was delivered was just too much for us to not laugh! The funniest thing about it was that the rest of the sentence would be delivered in a very monotone manner. Well ... guess you had to be THERE!

After our tour of the castle we headed back north and stopped by the Capitol Building in Hartford for a brief visit before going back to Mags' house for what was an absolutely fantastic dinner of individual Beef Wellingtons, home-style mashed potatoes, garlic green beans, and two desserts - bread pudding and apple pie. To say that Mags outdid herself in the kitchen would be a complete and total understatement as the girl can cook and then some!

I finally pushed myself away from the table around 9:30 and made my way back to Norwich after giving Mags directions for meeting up Sunday evening. Needless to say I was way too wiped out to even think about posting anything last night and chances are real good I'm going to be way too tired when I get back from our evening at the Mohegan Sun tonight. Add on the fact that I have to go to work in the morning and it may be awhile before there is another update! No doubt Mo and Mags have been too busy visiting the Atlantic Ocean and eating clam cakes and doughboys in Rhode Island to spend any time blogging either and I can't say that I blame them at all! Fortunately today has been much cooler in temperatures, though a bit on the overcast side. Oh well, some things you just can't control at all!

For those of you waiting for pictures - my camera battery went dead while at Gillette Castle and Mo's died at Mags' house last evening but I'm sure there will be more pictures than what I've provided here in the future - some maybe even with people in them! At least I sure hope so! You just might have to be a bit more patient!